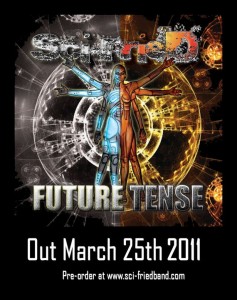 In the not so distant future the decaying world economy forced a brilliant team of scientists to launch a secret initiative. This initiative would forever change the course of events that have placed the human race on the brink of extinction. They sent one band back in time to alter the course of events in the hope that changing the past would save the future.

Future Tense is the third release from Sci-Fried, the central Florida based band that boldly goes where no band has gone before. The CD has been over a year in the making and the wait is well worth it.

Sci-Fried dare to continue to redefine what geek rock is. This album has a bit of everything for every geek of every creed.

“The Away Team” is a great Star Trek song with pounding guitars and an underlying theme of the heroic away team being thought of like the “A-Team”. I would love that concept to me made into a fan film or Robot Chicken sketch.

“Chosen One” really shows the versatility of the band. Singer KSV throws down some nerdcore lyrics to an 8 bit beat. You’ll be wanting to pull out your NES and play some Zelda.

“Embrace The Dark Side” is a powerful Star Wars metal song. It’s epic with amazing guitar solos that let Guitarist Chuck Silver and Bassist Sunni Simmons absolutely shine. It has a very epic feel and possibly some subliminal messages. You’ll want to join the empire after hearing this one.

“Evil Dead Guy” is a fun romp that pays homage to Bruce Campbell and the Evil Dead movies. The vocals are superb on this song. I have heard it several time last year on their 2010 tour and was very excited to hear the studio version. I was not disappointed.

“Fifty-One” A pounding song about having to escape the place the government doesn’t want you to know about. The song just screams SyFy orignal movie. SyFy, if you’re reading this, listen to the song and write a movie.

“Foiled Again” is a song introduced by the band at Nerdapalooza. The song is made even more special by the collaborative effort on the song by Marc With A C. The song is a dedication to the many times the Legion of Doom is foiled by the Super Friends. Not even taco night is safe at LoD HQ. The song really blends Sci-Fried’s style with Marc’s more acoustic sound.

“Geek Rock” is a song that defines a movement. This a hard rock anthem to let the world know that the Geek Age is upon us. Shatter the preconceptions. Time to raise your geek flag and be proud that you are a geek. This is probably my favorite song on the album.

“Looking Back At Today” gives us a good look at the way Sci-Fi has changed our lives. We can
communicate like on Star Trek but we still don’t have those flying cars. I am perfectly fine that the machines are not our supreme overlords yet.

“LV-426” is a song that leaves you wanting more. The Aliens inspired song has phenominal lyrics and really allows the guitars and drums to shine. This song is a convention favorite as I have heard it live several times and it gets a crowd pumped really fast.

“Serenity Lost” is an acoustic song form the Godfathers of Geek Rock”. This song is such a fitting tribute to a show that ended far too soon. Also, look for a special theme through the whole song. I fell in love with this song the first time I heard it. It really showcases the bands versatility.

“A Silly Song” is a fun fast paced tribute to Monty Python. KSV shines with lead vocals on this song. Also the coconut clap in the background is a nice touch and adds to the feel of the song.

“So Far From Home” will have you wanting to explore the brave new worlds and head bang while you’re doing it.

“Tech Support” is a fun song dedicated to the world of cheap IT work. Give that one guy you know some booze and a couple bucks and he’ll have your computer up and running in no time. The trumpet in the background really adds a fun tempo to the song.

“We’re Ready To Believe You” is the new Ghostbusters anthem. This song is catchy and you’ll be singing it for days. I can’t wait to hear this song live.

This album is a must buy. Dr Vern, KSV, Jim, Chuck, Sunni, and Nash have worked long and hard to bring us the definitive geek rock sound. I have been blessed to know Sci-Fried for the last year and a half. I can honestly say this is their best album yet. If you have a chance to see them live, take advantage of it. The fans are what make this possible. This was an album made for the fans beauase of the fans. The album releases March 25th during MegaCon weekend in Orlando Fl.

You can check out more of Sci-Fried and pre-order a CD at http://www.sci-friedband.com