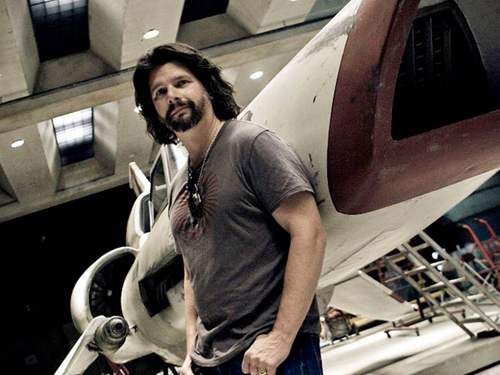 With the upcoming release of JJ Abrams “Star Trek: Into Darkness”, many of us are reliving out love of Star Trek in preparation for the release. With watching old episodes, the age old question of whether or not Star Trek will return to the small screen come up again.

Recently Star Trek.com did an interview with Ronald Moore. Moore is the man responsible for the Battle Star Galactica reboot, but much of his early career was spent working on the post Gene Roddenberry era of Star Trek. He was a writer and producer on TNG, DS9, and Voyager. In the interview, he gave some comments on why he believes that Star trek is better suited as a television series.

I do. I think that Star Trek, in its DNA, is a television show. The features are great. They’re a lot of fun and they’ve certainly opened it up to a lot of different audiences, but the features all are basically atypical episodes, if you think about it. The features are very big action-adventure movies, lots of spectacle, run and jump, shoot-em-up and blowing things up. The fate of the Earth, or the universe itself, is always at stake. It’s always about the captain, and one other character has a strong B-story, and everyone else sort of has very small roles beyond that. But Star Trek, as originally conceived, and as you saw play out in all the other series, was really a morality play every week, and it was about an ensemble of players. They were exploring science fiction ideas, sociological ideas and moral ideas. That’s really what the shows are about, and the movies are just pitched in a different way and at a different audience.

The movies will do a story where the captain is split in two by a transporter accident and one half is evil and one half is good, and the whole story is about where does the nature of a man’s strength come from? What makes a man a man? Is it his good side? His bad side? Or how the two come together to make something greater than the sum of its parts? The movies will never do that. They’ll never do a day-in-the-life story with Data [the excellent season 4 episode “Data’s Day”] or something like “Lower Decks,” where you go explore the other characters. They’ll never do all the things that all of us who are fans fell in love with this franchise for. So I think, at some point, Star Trek will return to television, and that would be great. I’d love to watch the weekly adventures again just because it gives you an opportunity to explore lots of other things besides the action-adventure component.

He makes some valid points about Trek and how it plays out on TV. What do you all think? Do you agree with him?