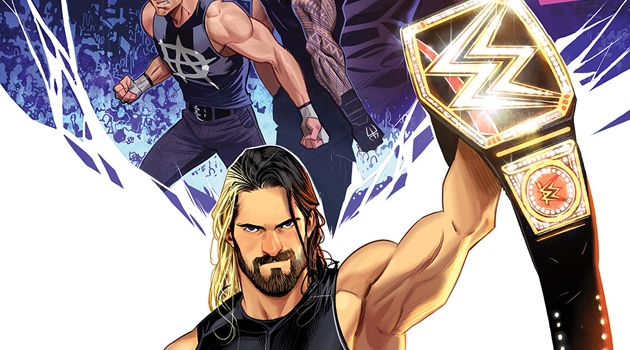 Do not try this at home. The words that proceeded wrestling shows for many years. Boom Studios brings us a look into the large than life world of WWE.

This first issue starts with Seth Rollins betraying the Shield and winning the Money In The Bank match. The rest of the issue chronicles Seth’s struggles with Dean Ambrose and Roman Reigns and his desire to cash in the contract and win the WWE Championship, The story also shows new side of the story seen with meetings between Rollins and Triple H determining when Rollins would strike with his title opportunity. The story allows for depth and backstory beyond what was seen in the WWE product on television.

So far the issue has delivered. Much like what WWE TV should be doing to try draw viewers tuning in each week, I am looking forward to what the next issues yields and how the story of Rollins becoming the top guy unfolds in the comic world. The art is clean and really emphasizes the larger than life personas of WWE entertainers. The physiques are a bit exaggerated, but in a way you would expect of a comic about WWE.

All in all, I recommend looking this book up. Boom Studios is really starting to come into its own with licensed property comics.

#CFCC #patch made by @patchczar it came out great.

#CFCC #patch made by @patchczar it came out great.