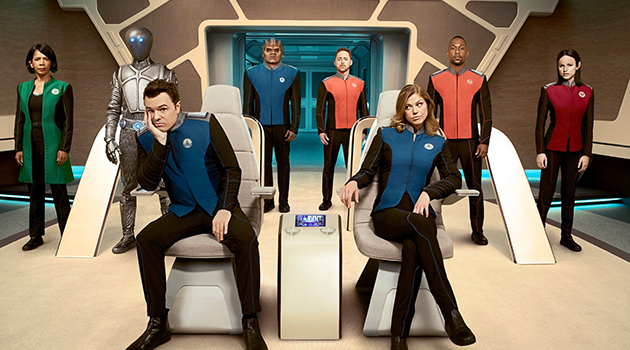 The Fox fall lineup will feature a new project from Seth MacFarlane. No, it’s not animated. It’s a live action scf-fi comedy that will seek to parody and respect Star Trek. This new live action series, a first for MacFarlane is called The Orville.

The show features MacFarlane as Ed Mercer, not the most qualified to command a ship but given a chance anyway as the fleet is large and someone had to be captain. Complicating matters is that his assigned first officer is his ex wife Kelly (played by Adrianne Palicki.) Hilarity ensues from there. Joining the cast will be MacFarlane regular Scott Grimes (Steve, American Dad).

MacFarlane is noted as having an appreciation for Star Trek. He is a Star Trek alumni, having appeared in several episodes of Enterprise. The Star Trek connection does not end there. In the role of Dr. Claire Finn is Penny Johnson, who many Trek fans may remember from Deep Space Nine as the recurring character Kasidy Yates.

The trailer had me laughing and seems to show a lot of promise. While you can expect the typical MacFarlane humor, it does look like the show will be a funny one that will homage to its inspiration while also making fun of it much in the same way Galaxy Quest did. Check out the trailer and let us know what you think.