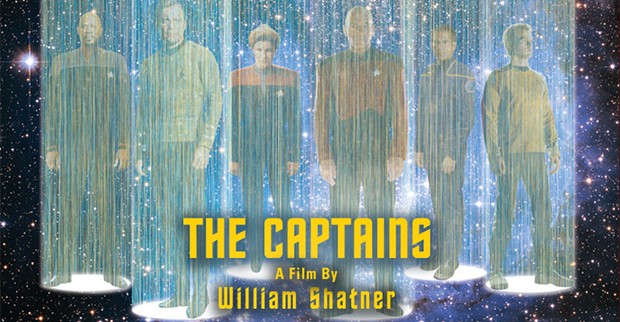 William Shatner is the man, the myth, and the legend. For years he has been known as the man to play Captain James T. Kirk on the hit series Star Trek. He’s also a man with questions. Questions that need answers. These questions are the focus of his self produced documentary, The Captains.

Shatner embarks on a journey from his home in Canada to travel to England, New York, New Jersey and California. Along the way, he talks with the other people who have held the title of Captain of a Star Trek series. Those being Patrick Stewart (Picard), Avery Brooks (Sisko), Kate Mulgrew (Janeway), Scott Bakula (Archer), and Chris Pine (2009 Kirk).

He meets with the actors in locales meant to make them more comfortable for the interview such as Stewart and Brooks’ respective homes, and a stage well known to Mulgrew. The topics of conversation begin harmlessly about their time on the show and humorous stories along the way. As the film goes on, the questions get deeper. Shatner probes the actors to tell of the difficulties they faced in their lives due to the show. Working long hours, not seeing their families, even divorces that resulted of the Hollywood hours and lifestyle. The actors talk of how they cope with those problems. Several of the actors fellow cast members are interviewed about how their captains were behind the scenes and the leadership roles they played as individual people.

Shatner parallels how they all had strong theater backgrounds and were prepared for their roles as Captain by playing strong characters in theatre. Shatner uses these experiences to help him deal with some resentment and embarrassment he had of playing the role of Captain Kirk. He also speaks with several people at conventions to help frame the answers he is looking for. He eventually learns to embrace that role and sees life from a different perspective.

I very much enjoyed The Captains. It was a great film that was highlighted with great insight into the individuals interviewed. As a fan of Star Trek, one can appreciate the condor the captains used in their interviews and showing more vulnerable sides to their personality. This is a very honest film and I have a new respect for all of the actors involved. I would definitely recommend seeing this film. It is available on Netflix streaming as well as DVD.