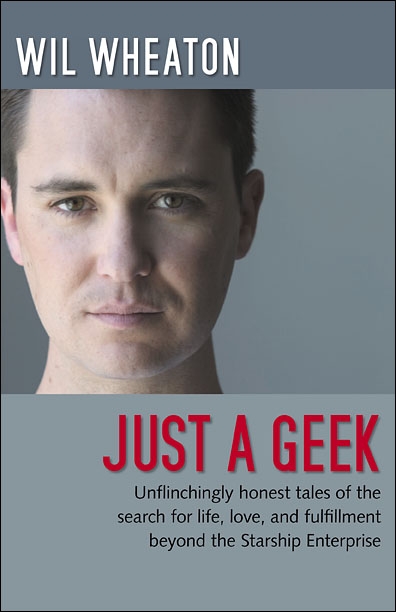 “Just A Geek” is the chronicling of Wil Wheaton discovering himself as a person. From the time he left Star Trek: The Next Generation and through a ten year period that followed, the book is a collection of memoirs and postings originally posted on Wheaton’s website. The stories are Wheaton telling of how he tried to move on to a successful movie career and build a family. Along the way, he rediscovers himself and learns what he really wants the most in life.

The best part of this book is the open honesty and candidness that Wheaton writes with. The reader can really connect with him as he accounts going from audition to audition and not getting the part because he wasn’t edgy enough or there was that one better candidate. Many of us can relate to that as we’ve gone through periods of unemployment and can never seem to land a job. The journey of self realization is one that we can all relate to. Wheaton’s writing style and openness make that easily accessible to the reader.

The big theme of the book was him facing the ghosts that haunted him. The big one of the book being ‘Prove To Everyone That Quitting Star Trek Wasn’t A Mistake.’ Facing inner demons and nagging voices can be difficult for anyone. Accepting them and growing from them is what Wheaton does in this story.

I very much recommend this book to everyone. The struggles he goes through are ones that anyone can relate to. Many geeks know of the current Wil Wheaton that has embraced his geekiness and now can be seen on The Big Theory and The Guild. “Just A Geek” is the story of the groundwork that made Wheaton the person he is today. Definitely give this one a read.

One thought on “Book Review: Just A Geek”