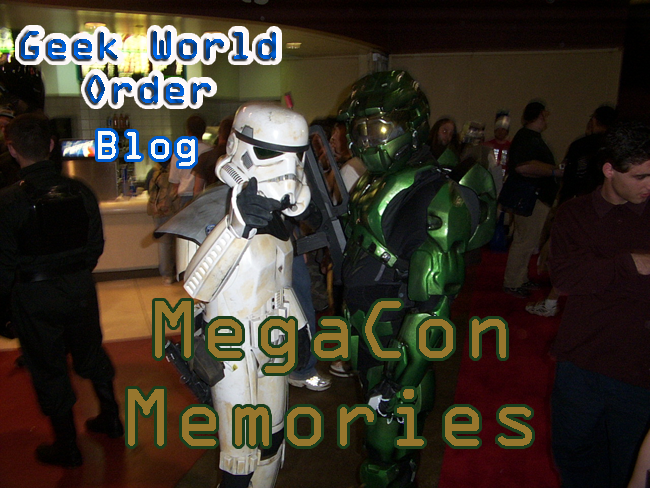 Hard to believe it’s less than a week until MegaCon. For those of you who don’t know what it is, MegaCon is a huge multi-genre convention. Represented at the convention are comics, sci-fi, anime, and just about everything else geeky. It’s the second biggest convention in the southeast (behind DragonCon) and the largest convention in Florida.

MegaCon was also the first convention I ever attended. It was back in 2005. Like anyone who had never attended a convention I really didn’t know what to expect. The first thing that got me was the sheer size of everything. MegaCon is held every year at the Orange County Convention Center in Orlando, Fl. I had never been to a large convention center like that.

I managed to take in a bit of everything that day. Costumes, the dealer room, panels. It was all very intriguing. I think I only saw one panel that day, or at least that I can remember. That was a demonstration by members of the 501st Star Wars Legion. They were talking about how they made their costumes and props. Very good stuff and they hold the panel every year.

That was definitely an incredible day. I didn’t even know until looking it up later that MegaCon was a three day event. The next year in 2006, I still only went for one day, but the next year was when I finally went for the whole weekend. MegaCon 2007 was the first convention I went for the entire weekend. It was also my first experience renting a hotel room. I stayed at a Howard Johnson. Unfortunately it was a good distance away from the convention center so walking to the convention center was out of the question. But other than that, it was a great experience and I’ve been going to MegaCon all three days ever since.

I have made so many great friends at conventions over the past few years. Some of the best conventions I’ve been to were ones where I could enjoy the experience with a group of friends. Really it gets better every year. I look forward to more of the same this year.

A convention is also a great place for some networking. I learned that last year. It was the first year I went after creating the site. I passed out some fliers and put my business card into a few people’s hands. Hopefully, I’ll be able to do more of that this year. I made a few mistakes last year and since I’ve learned how to network at a convention much more easily.

So in a few short days, I’ll be back in Orlando ready for an amazing weekend. Can’t wait to hit up some of the after parties as well.