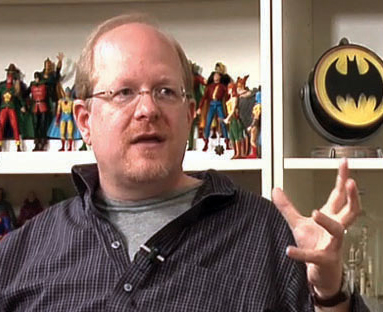 There has always been a hot debate about the recent moves to electric distribution of comics. Many say that it makes it easier to get and read comics as one can download them to whatever digital device they already carry for other things to slim down their need for a backpack. Others say it will be the death of brick and mortar comic book stores. I personally say as long as the stories are good, digital and paper comics will both see their fair share of sales for years to come. The latest wheel in the cog comes from Orlando based comic shop owner, Phil Boyle. Boyle owns Coliseum of Comics. Boyle recently announced that he will be banning the sale of comics by creator Mark Waid from his stores. He believes Waid is abandoning the print medium and doing damage to the industry.

Waid, who has written such titles as Daredevil and Kingdom Come had announced this past weekend at WonderCon that he will be selling off a significant part of his comic collection to fund his latest endeavor, an online exclusive comic.

Boyle had this to say about the situation: “So here’s my deal. I haven’t promoted anything by Mark in some time due to his vociferousness against print comics. Now I will actively be letting customers know that his work isn’t welcome in my stores. Movie stars, rock stars, and comic creators only have a soapbox because of their successes. I won’t help contribute to any success that will be turned against me. And no, I see no difference between a creator owned Image book or a relaunch of a major character from Marvel or DC. I have 1000 other creators who I can support so even tanking a big character book won’t impact my bottom line significantly.”

Waid meanwhile says “Sincere question: can anyone point me to anywhere I’ve ever said that digital is the “only” way for comics to go? Anywhere?
Florida shoppers: My comics are banned at Coliseum. Buy from Big Mike’s or A Comic Shop or Acme Superstore or Macs. Where else?”

Waid is merely looking to house this one project as an electronic exclusive title. Waid is advocating that many creators adapt to the newest form of media distribution. He will still be working on his other projects that still sell in brick and mortar stores on shiny high quality paper. Many independent publishers and creators use digital methods as it can be an increase in their sales. They can self publish to avoid massive overhead costs or publish a story that could be considered risky and many traditional publishers would pass on in fear of not actually selling. Self publishers also get to keep more of the profits while not paying the publishing house. Waid sees his latest endeavor as a way to try new concepts and help the industry.

Several local comic shops have taken to the idea of selling digital comics as a way to grow their customer base. Heroes Landing, for example has an account on Comixoly that their customers can access via the Heroes Landing website to access digital comics with a portion of the sales going to the store itself. Boyle and and Coliseum of Comics are missing out on a great way to engage their audience and both gain and retain customers. Many consumers lately love digital comics as their schedules don’t always allow the to be in the shop regularly. Shops would also benefit as customers who move to a new location may not have a comic shop near them. They can buy digitally through their local shop back home and still support their favorite comic shop from many miles and states or even countries away.

So while I do support the local comic book shops, I do believe that digital comics have their place in the industry and can do a lot to help it. This latest development and a few other reasons mean that Coliseum of Comics no longer has my business. They haven’t for a while, but this really enforces that decision.