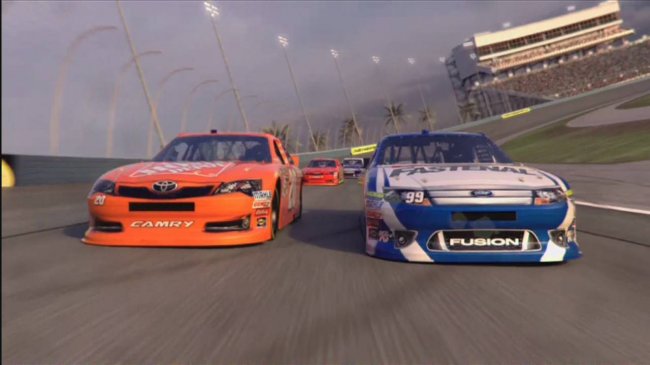 I love the high speed chess game known as NASCAR. Being a big racing fan, I couldn’t wait to get my hands on this year’s NASCAR title, NASCAR The Game: Inside Line. It’s been a while since I picked up a NASCAR title. Not since NASCAR 2005 Chase for The Cup back on the Gamecube. I was excited to see how NASCAR games had progressed since then.

The gameplay is nice. Career mode is fun, the graphics are sharp and the cars look great. Eutechnyx has brought a solid title to the racing world. Load screens are not a chore as trivia questions come up to keep you entertained while waiting (there’s even an X-Box 360 achievement for getting 150 questions correct). While at the track, load screens consist of track facts and a hanging credential that gives you your offline stats on the track (there’s an achievement for flipping the thing 500 times as both sides have stats).

Career mode is fun and racing in the Sprint Cup series is enjoyable, but that’s all you get. Older titles allowed you to work your way up through the ranks such as modifieds, Truck Series, and Nationwide before coming into the cup series. This game’s career mode starts you directly in the Cup series. You can earn sponsors based on performance and earn credits to make improvements to your fledgling team to compete with the big boys (and girl) of the sport.

I do miss not having the lower series in the game as they do race on tracks not in the Cup series. I really would have love to run a truck or Nationwide car at Iowa Speedway

Another flaw of the game is in the AI. Older games matched the drivers styles a lot better. Some drivers in this game, such as the notoriously over nice Mark Martin drive very aggressively in the game and unlike their real life counterparts.

Even with these flaws, the title is still enjoyable and it’s fun to go out and run some laps and work your way though traffic. The tracks themselves are beautifully detailed even down to the pit crews that work the cars. The game is definitely worth picking up if you’re a NASCAR fan.