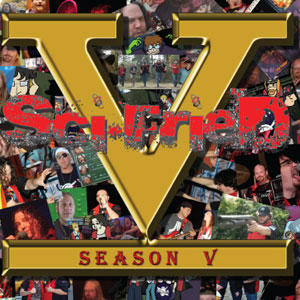 Sci-Fried is back with an all new album. The Orlando based Geek rockers have released their fifth studio album entitled Season V. With a strong assortment of songs covering a variety of geeky topics, the band has assembled another hit album that could easily be called their best to date.

The bands depth is shown strongly here as the writing on the songs becomes much more complex and layered than their previous offerings. Songs such as “Man In A Can” and “Hulk Smash” are both great superhero ballads that delve into the complexities of the characters they are about.

The album opens with the album title track “Season V” which is a playful tune that reminds us that many great shows don’t make it that many seasons (Thanks, Fox) or undergo radical changes. Lord of The rings, superhroes, zombies, Star Trek, and Star Wars are among the subjects highlighted on the album.

The bands sound is tight as usual on the album. Vern and KSV bring the fire in their vocal work and work well together. This is especially seen with their harmonizing on “Hulk Smash.” Dobbs (bass), Chuck (guitar), and Dammit Jim (drums) complete the band lineup on this album and the songs all speak well as to the bands talent.

Another great surprise if the track “Left behind.” The Star Trek based song is an awesome love song. You’ll have to listen to it. It shows the bands strength when they can go from hard rock power to a touching love song just like that.

“Suit Up” is one of my favorite tracks on the album. The song is a great snapshot of all the crazy things that can happen during a convention weekend. I’ve gone through the song and can easily say I’ve seen everything they mention in the song happen. I love conventions and this song hypes me up and gets me thinking about a lot of great memories. That one is going on my road trip playlist for sure.

“Origins” is another great geek pride anthem and also includes vocal work from all five members of the band. The album is closed out with a fresh recording of their cover of “Godzilla” originally performed by Blue Oyster Cult. The album is a great one and is a definite must own.