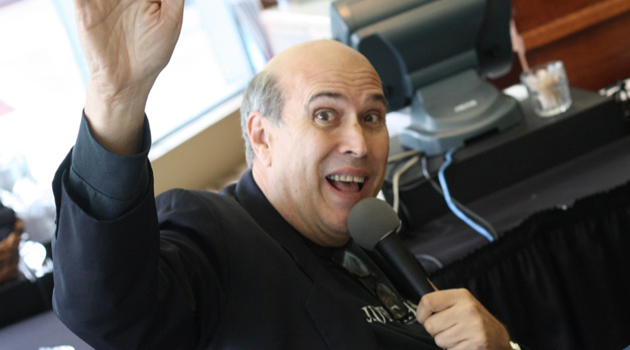 Melbourne, Florida doesn’t see near the convention volume that Orlando does. When we get an event over here I always try to attend. Space Coast Nerd Fest celebrate its third year in Melbourne with a few changes. After its first two years in the Melbourne Auditorium, they moved to the Rialto Hilton Plaza and its convention center. The two day convention had its ups and downs.

The new location was very nice, but the hotel was going through several renovations that forced a few last minute changes. The area that was supposed to be the panel room and the game room were part of the areas being renovated. The game room ended up being cancelled, although I did see a few die hards create small gaming groups in an out of the way area, so props to them for making the best of their weekend. The panel room ended up being moved to one of the hotel restaurants. The big windows were murder on my camera settings, but it still worked out well in the end.

Speaking of the panel room, the panels were hosted by Marc Lee, who has hosted such events as MegaCon and DragonCon. Marc was fantastic as host and his guests shined. Dante Basco, Michael Berryman, George Lowe, Kevin Nash, Ricou Browning and Julie Adams were among the guests to host Q&A panels and they all were great as they told about their time in the industry and all shared great stories.

There were also a number of activities outdoor to entertain the crowd. Several acts performed on an outdoor stage, as medieval combat waged and a full size pirate ship were on display. Weather took its toll Saturday as rain interfered, but Sunday was beautiful and the outdoor activities went on as planned.

All in all, it was a fun weekend. I had a good time and really hope our area gets more great nerd events.