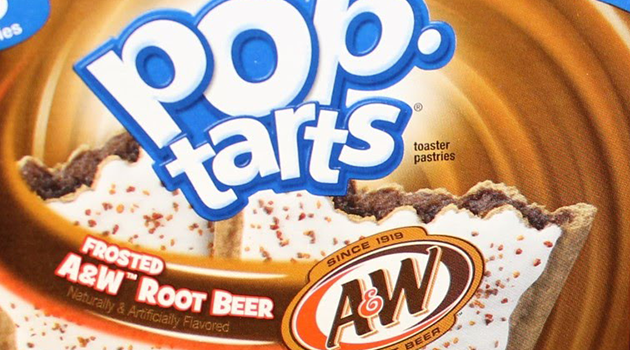 Pop tarts have come in a variety of flavors over the years. Many come and go in short seasonal runs. That is the case with their current ones based on A&W Root beer and Crush Orange Soda. After seeing them a few times at Wal-Mart I decided to try the A&W ones. Unfortunately, they only came in a 16 pack and I was a bit anxious to buy them as I didn’t want to buy that many in case they weren’t good. It looks like I have a bunch of Pop tarts that are going to go to waste.

These were just disappointing. The best thing about these was the smell of them. Opening the package, I was greeted to the familiar smell of A&W root beer. That was the part they got right. It mostly went downhill from there. The taste was mostly rootbeer but still felt a bit odd. This was when the pop tart was right out of the package and not heated. I finished the first one but wasn’t particularly looking forward to the second one in the package. Then I decided to heat the second one.

That was a mistake. Have you ever accidently drank a soda that sat out too long? Maybe one that got warmed up from being left in your car? That’s what happened when I heated up the poptart. It was gross. So if you try these, keep them room temperature and do not heat them.

So now, I’m sitting here with a sense of regret and the rest of a box of Poptarts that will just be sitting there. I have no desire to eat these ever again. These are definitely the worst pop tarts I have ever had.