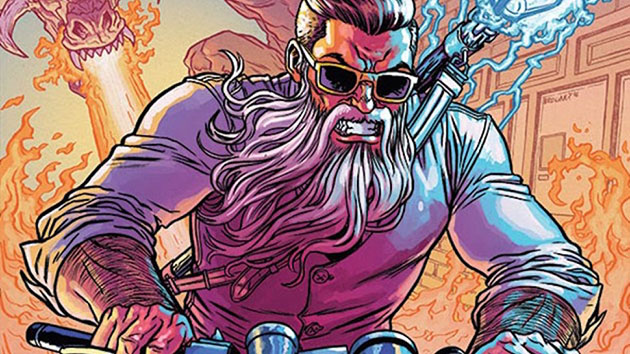 The thought of wizards harkens many of us to olden times. Medieval times with knights, kings, and queens. But what if wizards existed in out time. What kind of effect would that have on us?

This is the scenario that Curse Words from Image Comics brings us. We are introduced to Wizord, a powerful wizard from another world. He is sent on a mission to destroy our world. He lands in modern New York and sets out to accomplich that task. The spell he would need to accomplish this task is a complicated one and requires much time for the ingredients to merge and grow powerful. In this time, Wizord explores and begins to see what the world is all about. He soon decides that destroying it is not what he wants to do, but rather save it.

With his new found desire, Wizord sets up in New York as a magician for hire, looking to do good things. He is soon encountered by beings from his home world, who are looking to punish him for going against their master’s wishes. Thus sets up what will likely be the recurring conflict.

So far, the first issue has been fun. The artwork is vivid and colorful. We are introduced to a world of magic that will most likely only get more powerful and spectacular as the series goes on. Wizord is already a cool character, who will hopefully be developed in a unique way to be dynamic and polarizing compared to his contemporaries back home. I enjoyed this first issue and will definitely look forward to more in the future.