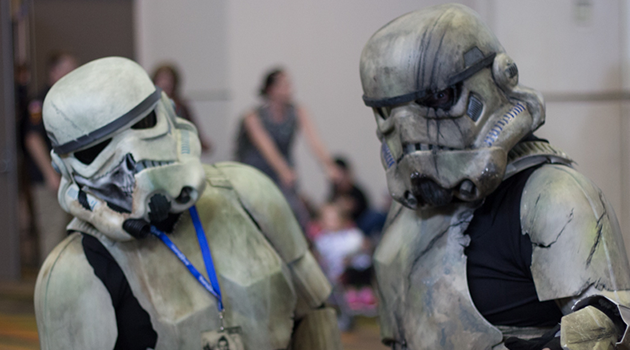 A long time ago, in a galaxy far, far away…

Okay, by that I mean last weekend in Orlando. I had to. Sorry. But also, not sorry. Last week was Star Wars Celebration. The biggest gathering of Star Wars fans and a complete four day binge of epic nerdiness. To say the least I had fun. It’s hard not to have fun when you can let go of all the worries of the world and geek out about Star Wars.

Star Wars Celebration 2017 took place at the Orange County Convention Center in Orlando, FL. Spanning the entire length of the West Concourse and all four floors, the four day event had something for fans of all ages. It had fun and surprises. The first of which occurred on Thursday. The opening festivities included a panel celebrating the 40th anniversary of Star Wars. During the panel, which featured several of the original actors from Star wars, including Mark Hamill and Anthony Daniels, two unannounced guests showed up. Both George Lucas and Harrison Ford made surprise appearances during the panel. The crowds definitely erupted as the panel was streamed through various parts of the convention center and you could just about hear the cheers from everywhere.

The excitement continued as the first trailer for The Last Jedi was unveiled to the world. Seeing the trailer in that setting was such a rush. The anticipation surely was awoken on that one. December can’t get here fast enough.

With this being the first Celebration since the passing of Carrie Fisher, there was certainly a great show of respect for her. Perhaps one of the more touching moments was a panel that Mark Hamill hosted, which was a loving tribute to Carrie Fisher as he spent an hour telling stories and just remembering one of his dearest friends. There were not many dry eyes in the house for that one.

There were some great moments for this journalist as well. I received my first invitation for media access to a large panel. The Star Wars Rebels panel was a great time. I was able to get in close, take some great shots and be front and center as the trailer debuted for Season 4 of the series, which is slated to be it’s last. Being able to see the first episode of the season as well was a great experience. Being able to take it all in so close is one of the reasons I do what I do and being able to share that is such a driving force for me. Celebration holds a special place in my heart as well as Celebration VI in 2012 was the first event I was given a press pass to. So to be able to add on to that experience with what I was able to do this year.

And of course, what would any convention be without the fans. The fans came out and just showed how it’s done. Great costumes and complete nerdery made the experience amazing. I was able to hang out with a so many great friends and experience others fans reactions while waiting in line. All in all, Star Wars Celebration was an amazing convention. I’m already looking forward to the next one. I may even try to travel if its not in Florida. Celebration is worth the trip.