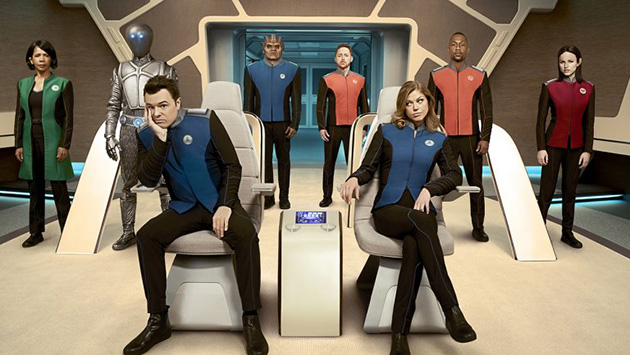 Seth MacFarlane stars in and created his own version of Star Trek. The Orville recently debuted and many questions have arisen due to the series. Is this going to be a sci-fi version of Family Guy? Is this show going to be a revolving series of poop jokes and non stop MacFarlane humor? Is this show any good? The surprising answer to this is yes. The Orville delivered in its debut episode.

The series opens with MacFarlane’s character Ed Mercer finding his wife having an affair with an alien. This and the following divorce get to him and he’s left a broken man. A year later, The Union (The Orville’s version of the Federation) decides to give Mercer one last shot and gives him command of the Orville, a mid size exploratory ship. he is sent on a routine supply mission and is later sent his first officer along the way. Kelly Grayson (his ex-wife).

The episode serves as a fine opener and gives the characters all a time to shine and establish their characters. The introduction of the Krill, a recurring evil alien race provide a surprising level of danger and give the Orville crew a good backdrop to come together as an effective crew despite the animosity of the captain and first officer, who form to make a very formidable team.

This was a fun and very solid opener for a sci-fi series. I had initial hesitation with the series and hoped it wouldn’t be Family Guy in Space. I was pleasantly surprised to see that while the MacFarlane jokes were there, they were kept to a minimum and the episode carried a surprisingly serious tone. The design of the series is amazing. The Orville looks like an advanced ship. The technology looks futuristic and the uniforms are stellar. I actually want one of these uniforms to wear at conventions.

All in all The Orville opened to a rousing success and hopefully this will continue on into the future.

Getting in the #Christmas spirit. #Selfie with a b

Getting in the #Christmas spirit. #Selfie with a b