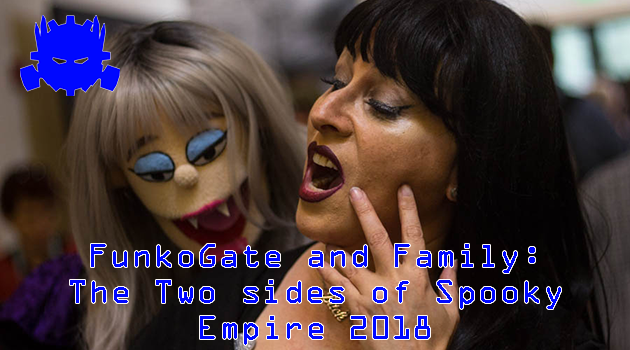 Halloween has come and gone and we’ve seen our share of frights and ghouls. Last weekend, horror and paranormal fans gathered for Spooky Empire, the annual genre convention that celebrates the love of the macabre. And boy was it an interesting one. Let me start out by saying that I love Spooky Empire. It is quickly gaining a place in my favorite conventions to attend on a yearly basis. It is a growing convention, but is still fan run and at its core a close knit family. I get to see some of the funniest, craziest people I have the privilege of calling friends and get to attend one hell of a convention that Petey and his staff put the utmost love and heart into.

Going in, I figured there would a little delay in things. Spooky had scored some amazing celebrity guests. Most notably were a combined appearance of X-Files leads David Duchovny and Gillian Anderson as well as Horror Queen Elvira, who was bringing with her a limited edition exclusive POP figure to Spooky. More on that one later. It absolutely worked though. The crowds came. This did cause some long lines and minor inconveniences in getting around the venue. But the Spooky staff were proactive in trying to resolve issues and keep things flowing as smoothly as possible.

Spooky Empire was held in a new venue this year, The Caribe Royale Orlando, a beautiful resort location just a few miles away from Disney. The venue also featured a rather spacious convention center area that hosted the convention. Yes, there were issues with parking. I stayed at the hotel with friends, but had to stay in the overflow parking as the main parking was packed when I arrived at noon on Friday. Luckily, there was a friendly staff member with a shuttle cart providing assistance. That would be a continued theme throughout the weekend. The staff of the hotel were all amazing and helped make the experience a good one, especially during the late night parties. This is a venue I would love to see Spooky come back to and I hope they will, as there is plenty of room for Spooky to experience some growth.

The other star of the show was Elvira, Mistress of The Dark. A fan favorite who has attended Spooky before, added to the excitement. She brought along with her an exclusive Funko POP figure for the weekend. Now, you may have heard mentions of #FunkoGate. Well, here’s where that came in. One of the major lines over the weekend was for the POP figure. There were a few hiccups in this process. First, Elvira was late. So were the POPs. The figure was supposed to go on sale at 5PM Friday and Elvira would be signing and doing photo ops not long after. As things can and do happen, a wrench gets thrown into the works. A delay had occurred and the POPs had not been delivered. Although it did take time, the POPs were located and rushed to Spooky through other means. The POPs were distributed around midnight. This is also after some people became a but unruly. There were some not so favorable chants going and there was an incident that involved having the Orange County Sheriff Office called in to maintain the peace. Certainly a memorable experience.

Luckily, this was the only major hurdle of the weekend. Otherwise, staff and volunteers did everything possible to improve communication, work the lines, and overall keep Spooky the  great convention it always is. There were some things that could be improved on to improve registration and other lines, but I hear these issues are already being worked on for future shows and were showing improvements as the weekend went on.

All conventions have their share of great experiences. One of those for me was getting to meet wrestling legend Mick Foley. He only appeared on the Friday of Spooky, but his appearance was an absolute joy. He is definitely one of the nicest, most down to earth human beings you can ever meet. he truly cares about his fans and took the time to make the experience memorable. Also, another great appearance was by Felissa Rose of Sleepaway Camp. She was definitely having fun all weekend and it’s amazing to see the guests who come to conventions and just have a good time with it. She knew where she was and who she was around. She definitely seemed to be making the most of it and enjoying the experience.

Spooky Empire was certainly a memorable weekend. At its core, Spooky is a family. It’s a place where a bunch of nerds who enjoy a different side of things can get together in a fun environment and let loose. The staff and the hotel helped make the weekend great and once again cemented why I love this convention. Another great Spooky in the books. Definitely looking forward to the next one