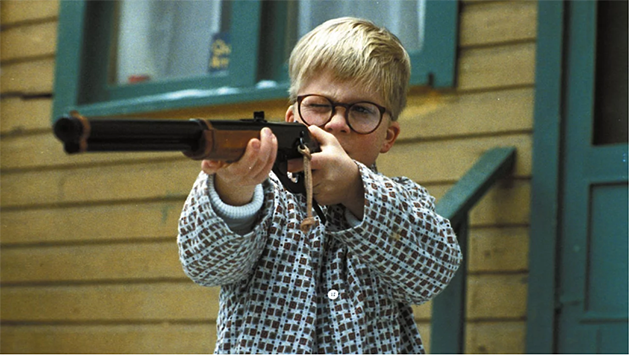 It’s hard to find someone who hasn’t at least heard of the 1983 movie, A Christmas Story. Almost as rare is to find someone who hasn’t seen it. It’s a fairly easy movie to find and watch. At least one station will play it on loop for the entire 24 hours of Christmas Day. But here we are, before tonight I had never seen Ralphie’s attempt to get the fabled red Ryder BB Gun for Christmas.

The story is framed as a recollection. An adult Ralphie is narrating the film which is set in his childhood. He recounts the tale of how he all he wanted for that Christmas was the Red Ryder Carbine Action 200-shot Range Model air rifle. He is constantly foiled at every opportunity by his parents, his teacher, and even a mall Santa, who all give him the same warning, the film’s signature line “You’ll shoot your eye out.”

Seeing as I had no nostalgic connection to this film, I was able to go in with fresh perspective. What did I think of this movie? Meh. It exists. It wasn’t particularly bad but nothing really stood out to me for it to be memorable. I didn’t rage quit while watching it, but I have no desire to watch it ever again. Ultimately, it’s not good because it fails to deliver on any potential it may have. It’s a mediocre film that can get somewhat boring at times.

The film suffers through several problems, that with small tweaks could have made it much more memorable and enjoyable. First of which are the characters. None of them are likable or enjoyable. The acting is off and stiff at points. The father is very overacted to a comedic level. That brings me to another problem I had with this movie. Was it supposed to be funny or a serious movie? The parts I thought were supposed to be funny really didn’t register a reaction with me. The bland characters gave me nothing to hold onto so that I would laugh when they were being funny. Several scenes seem to have a more serious overtone. When the leg lamp is destroyed, I thought the movie was going to take a very dark turn between the father and the mother. I honestly though he was going to hit her. That’s what the actor’s reaction in the scene seemed to imply.

Another problem I had with this movie was the pacing of it. Many of the scenes felt to come one after another and outside of Ralphie’s desire to own the BB gun had almost no connectivity to one another. This made the movie felt like it was dragging in the middle. I almost fell asleep and realized that the 24 hour marathons of this movie were almost a genius idea. If you do fall asleep, you can just pick up where you left off on the next viewing in two hours. The movie hit several cringe worthy stops for awkward comedic effect. These tended to be at the end of day dream sequences involving Ralphie having the BB gun and standing up to bullies or saving his family from robbers, only to be snapped back to reality when people realize he’s not paying attention to anything. These awkward pauses drag on way too long and get uncomfortable.

Overall, this was a mostly boring movie. I know this film is hyped up around the holidays and many people love it. Personally, I couldn’t find anything to connect too and ultimately I didn’t care at all if Ralphie got the Red Ryder. This film had potential and a few tweaks and a better story flow could have made this one of the Christmas classics. Unfortunately, Elf is no longer my least favorite Christmas movie. A Christmas Story now takes that spot.

One thought on “My First Viewing of A Christmas Story”