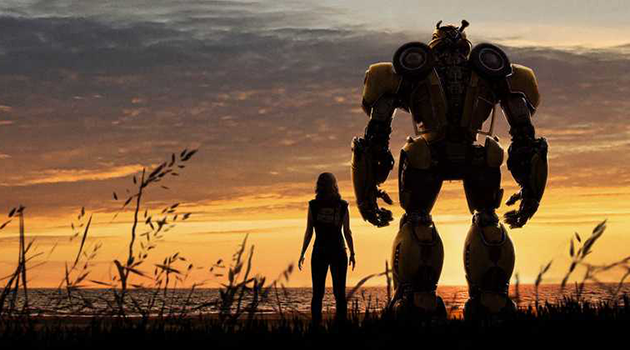 We’re going back in time with the Transformers movies. In Bumblebee, we go back to the title Autobot’s first encounter on earth.

We go back to the war itself raging on Cybertron. As the Autobts are quickly outnumbered, we see Optimus Prime ordering his troops to fall back and escape. This opening sequence is beautiful. We get well designed Autobots and Decepticons. We can clearly tell who the characters are and the designs of the Transformers are what we were all hoping for when the first live action Transformers movie debuted in 2007. This sequence alone made me want an even more prequel movie highlighting the war and getting more robot action. The first few minutes of Bumblebee are exactly what we have wanted in the live action movies.

As the Autobots abandon Cybertron to regroup, B-127 is sent to Earth. As he arrives it is the year 1987. B-127 runs into some federal agents and soon attacked by a Decepticon. The ensuing battle damages B-127, including showing us how his voice is damaged and he can not speak when we see him in the 2007 movie. He defeats the Decepticon and takes on a disguise to hide as his power runs low and he goes into stasis lock.

From here, we’re introduced to out main human character, Charlie (Hailee Steinfeld). It’s Charlie’s 18th birthday and she’s looking to escape her life. She hasn’t gotten over her father’s death and is looking to earn enough money to finish restoring his Corvette so she can set out. She has a demeaning job at the hot dog stand on the beach and uses all the money she earns to get parts from her uncle’s scrap yard. After knocking over a boat, she finds a yellow VW Beetle under a tarp. she makes a deal with her uncle to have the car if she can get it started. She takes the car home and soon learns that her new car is much more than  meets the eye. They soon form a friendship including Charlie deciding to call him Bumblebee due to the buzzing sound he makes due to his damaged voice circuits.

The reactivation of Bumblebee send out a distress signal that is received by Shatter and Dropkick, two Decepticons sent to Earth to locate Bumblebee and signal the Decepticons to their location upon finding the Autobot resistance. They fool Sector 7, although Colonel Burns (John Cena) is suspicious, into believing they are friendly to gain access to satellite technology to help them locate Autobots and plan to use that to contact the Decepticons. The remainder of the movie sees Bumblebee and Charlie try to outrun the government and stop the Decepticon threat.

Overall, I though this was a good movie. It’s easily my favorite of the live action Transformers movies. The story is easy to follow unlike previous convoluted Transformers films. The characters are mostly likable in this, and the Transformers are  very distinguishable as Transformers. They can be easily identified in fight scenes, which could be hard to do in previous films directed or produced by Michael Bay. Bay is still Producer on Bumblebee, but Travis Knight is in the director’s chair for this one. he handled it well, and the revamping to the overall Transformers look made this an enjoyable movie. This movie also left me wanting more. Especially when it comes to Cybertron and the Great War.

Definitely check out Bumblebee. it is well worth the watch.