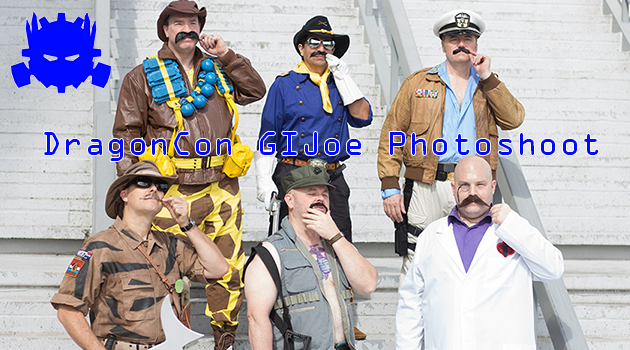 Among the many things to occur at DragonCon, you will find many group fandom photoshoots throughout the weekend. These photoshoots are absolutely fun and are a great way for fans to get together and celebrate their fandom. One of the shoots that I was able to participate in was the GIJoe shoot.

GIJoe fans have a good presence at DragonCon. A large number of the costumers that gather are members of a group known as The Finest: A GIJoe Costume Club. This shoot was a great chance for their members and others who enjoy GIJoe to get together and hang out. The club also has some great initiatives. The club does great charity work raising funds for K9s for Warriors, an organization that trains rescue dogs to be paired with combat veterans. This large shoot and others hosted by its members provide content for their social media outlets to help promote those charity causes.

For me, participating in these shoots is these shoots is always a balancing act. As a member of the media, I am wanting to take shots and get content for my site. I am also in costume at the same time being in the shoot. I personally cosplay as several GIJoe characters. For the shoot this day, I was going as a character known as Scoop. Scoop’s position in GIJoe is Combat Information Specialist, essentially a combat reporter. I put the costume together to be an outlet for me as a reporter and a way for me to be able to carry my camera gear and be in costume at the same time. It’s one of my favorite costumes that I do. So, being Scoop, I of course had to document the event. I was able to get a good number of photos from the event and had so much fun.

These group shoots really embody what conventions are about: having fun with others who enjoy the same things you do. Hanging out with my fellow GIJoes was one of my big goals for DragonCon and I am happy to say I accomplished that goal. I am definitely wanting to get back to DragonCon next year and the GIJoe shoot is on my list of things to do next year.