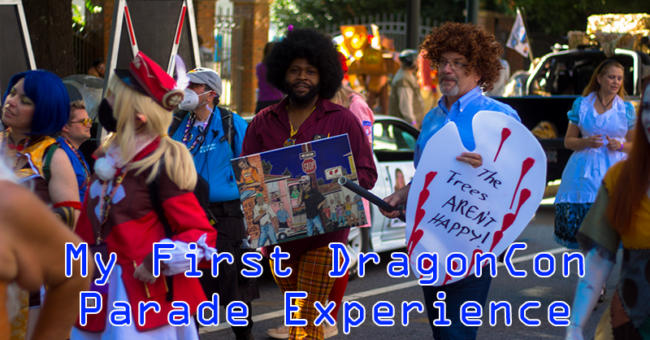 This past DragonCon, I got to experience more of what the convention had to offer. A unique convention all in its own, there are a number of events that are fairly unique to DragonCon. With it spanning much of Downtown Atlanta, the use of the city streets allows DragonCon to host an annual parade featuring many groups of costumers showing off their craft and marching for the citizens of Atlanta. This year, I was able to experience that spectacle for the first time. I had a pretty good view for the parade, I was in it!

Waking up early is never fun, but you do what you need to. It’s hard to do during DragonCon especially but I managed to get up and in costume. I met up with my fellow G.I.Joe costumers in the lobby of the Hyatt (conveniently the hotel I was staying at). From there, we made our way to the staging grounds for the parade. Seeing the route was great. The Atlanta skyline kept much of it in shade so it was a rather pleasant morning. We made it to the staging area where we we instructed to our places. Luckily we were early in the order just after the Halo group. We were the 13th group to walk. The local Boy Scout troop was out in force providing water to the walkers.

From there, it was time to march. It was an interesting route. We started to fairly bare streets. A few onlookers getting early views. This year’s route was closed to only allow DragonCon attendees and authorized personnel controlling the parade route to attend. We were able to move around so people could take photos and a few of the parade controllers pointed out specific cameras covering the parade through DragonCon TV and the local CW station who was also showing the parade live.

As we got closer to the host hotels, the streets became more crowded as more crowds formed with the convention attendees and the mood began to pick up. It was an electric feeling that made us really pick up the performance. Our group got the crowds to do dueling chants of “Cobra!” and “Yo Joe!”. Being in that environment was an absolute rush. I had honestly never felt anything like that before. It’s hard to believe that for someone as introverted as myself, the parade was a whole different environment and with a crowd of people who liked the same things I do, it was so easy to break out and have fun with it. The parade was a blast and I absolutely want to do it again in the future. This is something that is going to take a permanent spot in my future DragonCon plans.