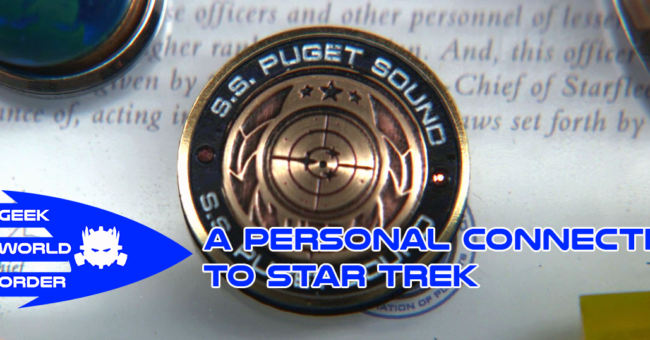 Throughout the many years I’ve been a fan of Star Trek, I always felt close to the franchise. There was always a draw to me as I held a fascination with science and space ships. I latched on to the series as a child and never looked back. To say that Star Trek is a part of my personality is a bit of an understatement.

Like all Star Trek fans, I felt connections to the characters I saw on my screen. I wanted to be cool and have a beard just like Riker. Well, at least I have the beard going for me. I always looked to Data and lack of understanding of human emotions. I’m not particularly good with emotions even to this day. I watched the crew of Deep Space Nine fight a war and saw the crew of Voyager get home. I tuned in every week and was hooked.

After some time, there was no Star Trek on TV. I found comfort in having my beloved series on Netflix, available to watch at a moment’s notice. I poured through the novels that were produced to get something new. But I, like many Star Trek fans, wanted more.

We finally got our wish with Discovery. While I haven’t been a huge fan of the series myself, I did want it to succeed enough to give us other series to latch onto. Eventually we would get Lower Decks, Picard, and through a backdoor in Discovery, we got Strange New Worlds.

Strange New Worlds takes us to Christopher Pike’s days as captain of the Enterprise years before James Kirk commanded the ship. With modern technology, we got a sleek looking enterprise and a chance to tell new stories with new characters and a new spin on some old ones.

The first three episodes of the series were great. Episode four drove it into a whole new gear. Here is where we find something that gives me a new, more personal connection to the franchise. As the episode opens, we get the crew observing Starfleet Remembrance Day. In the tradition, the crew wear pins with the name and insignia of former ships they had served on that were lost with their crews in the line of service. It’s a very fitting reminder of those who were lost. This episode also took on the added significance as it debuted going into the Memorial Day weekend here in the United States. I want to believe that this was intentional of the writers and producers.

We see the Enterprise’s security chief in her quarters looking at her pin. It is emblazoned with the name SS Puget Sound, the colony ship she lived on that was lost in an attack by the Gorn. Here is where the personal connection hits for me. Star Trek has a tradition of naming ships after historical figures or ships that had served here on earth. There was a US Navy ship called the USS Puget Sound. This was a ship that was active when my father was in the Navy and that served on for several years.

When I saw that on the screen, it hit me a little. I’ll admit I got a bit emotional about it. When the episode ended, I even told my mother about it. It was definitely something that put a smile on my face and made me think of some good memories. My father didn’t pass while in the service, but when I was a teenager, long after his service ended. It’s still nice to take a moment to remember at this particular time of year. This is the most personal connection to anything I have seen in Star Trek. Even as I type this, I am reliving what I felt and it feels good. Thank you, Star Trek, for making my enjoyment of your latest series so memorable and personal.