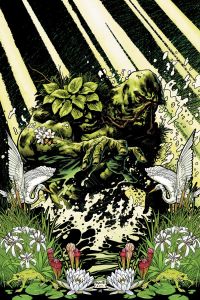 The DC Relaunch brings a character back to the fold in Swamp Thing. The story starts with a conversation between Batman, Superman, and Aquaman. Batman is telling a story from his childhood and uses it to equate some strange happenings around the world.

Superman flies off to find Alec Holland, the man once known as Swamp Thing. The botanist is now laying low and working as a construction worker. Superman wants to know if he’s aware of anything about what’s been going on but Alec continues to be curt with Superman trying to get him to go away.

The villain is vaguely introduced as some thugs are arguing about the dissappearance of some mammoth bones from a dig site. Parasitic mosquitoes attack the men and it is revealed that the mammoth is now alive.

Alec is in his temporary digs at a motel and has a vivid dream. He is then awoken surrounded by plants. He takes his formula and tries to throw it away. He is then confronted by Swamp Thing as the issue ends.

This was a good book. I’ll pick it up next month and see how the events shake up. I haven’t kept up with DC so I don’t know why Alec and Swamp Thing are two separate individuals. I hope Scott Snyder does something to quickly address that in a future issue.

My only gripe about this comic is the art. I felt it was very weak. The artist drew Superman with a fat head and it was really distracting to me. I hope the art picks up next issue. But that aside, it’s worth a buy.