The Dark Side of The Doctor

Doctor Who has been on the air on BBC for almost 50 years, and part of the reason it’s lasted this long is partially due to the ever changing faces of the show.  But no matter how many regenerations he goes through one thing remains the same; as whimsical and fancy-free as he may be, there’s another side to The Doctor, a dark side, and in this past week’s episode it was definitely on display.

One of the best things this show brings to the table is a continuity that spans decades.  Nothing and no one is ever forgotten.  Before she passed, Elisabeth Sladen reprised her role as Sarah Jane Smith several times with David Tenant.  And Davros and the Master are two villains who keep on showing up time and time again.

In the most recent episode before writing this, “The Girl Who Waited”, we’re faced with a side of The Doctor not many people particularly like.  When The Doctor makes a mistake, he’s mad at himself more than anything else, and he’s so passionate about his friends and the people he loves that when his mistakes jeopardize their lives he becomes this machine of unfeeling logic.  While it’s good to have this in a character when it comes to time travel, The Doctor is one character it’s just scary to see it come from.  I think, because he’s seen the repercussions of his mistakes in the past echoing into his present.

During the run of episodes, Genesis of the Daleks, The Doctor is given the unique opportunity to wipe the Dalek race from existence.  And he doesn’t take it.  The Daleks go on to terrorize and exterminate entire planets and entire races of people.  And it all rests on The Doctor’s shoulders because he thought they could be changed, that they could be different.  So he doesn’t kill them and manages to escape back to The TARDIS.  The question is; if you held the switch that would eliminate the Nazis would you do it?  A lot of people would jump on this and answer “Yes, press the button!” without even considering the repercussions.  The Doctor, however, sat there and said “What gives me the right?” and eventually threw down the charges, even after being attacked by three of the creatures he was to destroy.

This decision has left the Doctor a changed man.  If he had destroyed them back then, there never would have been a Time War.  Had there never been a Time War, there’d still be a Gallifrey and Time Lords.  He never would have lost them while defeating The Daleks.  So the weight of this decision bears heavily on his shoulders and whenever he’s now faced with, even a single, Dalek he’s instantly a different man.  Even during his 9th incarnation played by Christopher Eccleston, when he’s first faced with a Dalek, which is broken and mangled, and in chains and being tortured, he’s playing Bad Cop/Bad Cop with it.  There’s no room for niceties with them, ever.  Matt Smith grabs the biggest heaviest object he can find and beats the hell out of one for answers; because he feels guilty for not killing them when he had the chance. 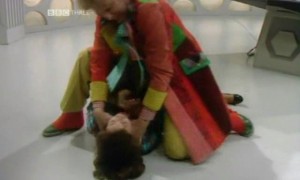 It doesn’t end there, though.  The Doctor is constantly struggling with loss, loss that could have been prevented.  In the episode Doomsday, Rose Tyler is almost lost inside of a collapsing dimensional bridge, she’s saved at the last possible second by her father, but she’s trapped now in this alternate time line.  In Journey’s End Donna Noble creates the Meta-Crisis 10th Doctor from the salvaged dismembered hand of The Doctor mid-regeneration.  Through this he becomes half human and she becomes half Time Lord.  The transition creates an onset of vast amounts of knowledge flooding into her brain, an amount so large she can’t handle it, The Doctor is then forced to wipe all the memories of their travels together, leaving her with her parents with strict instruction to make no mention of her time with him, otherwise she could’ve die.  Also, after regenerating he, then played by Colin Baker, attacked and strangled, nearly killing, his companion.  This is just a few recent examples from a history of messing people up.

The man is over 900 years old. He’s been responsible for the near death of not only those close to him but millions of others unbeknownst to them as well as the entirety of his home planet.  He’s been to hell and back, he’s stood in the way of death with nothing more than a screwdriver more times than anyone and he comes back every single time.  He’s run off invasions with the mere sound of his voice, and fended off the galaxy’s greatest threats with not much more than a bag of jelly babies or a jammy dodger.

So, the next time you want to shrug off The Doctor keep in mind that in a fair fight, I’d put The Doctor at an advantage over The Sith, The Borg, and a handful of Cylons any day.

6 thoughts on “The Dark Side of the Doctor”