With the relaunch of DC Comics, we knew a lot of characters were going to have some personality tweaks done to them. Having read a few of the new titles, I’ve seen a few things that have sort of disturbed me some. The amount of sexualized content in the titles is a bit high. I’d like to talk about a couple of examples of this today. Those being Catwoman and Red Hood & The Outlaws.

Now don’t get me wrong, I’m not a total prude, but I do see myself as having a fairly conservative view on things. Now as far as I can tell, alot of comics are still being marketed to children or at least still have that stigma attached to them. That is unless I’ve missed a demographic shift where the main comic audience is much older now.

The first example come in the title Red Hood & The Outlaws. Starfire is made out to be a complete whore in this book. I’m somewhat familiar with Starfire before the relaunch. She was a bit naive and could be ditzy at times, but never to the extent shown in this book. Her costume basically just covers what the censors require to be covered. Also during the issue, she directly asks a man if he wants to have sex with her. 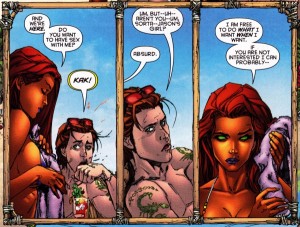 The new Catwoman title doesn’t have much redeeming factor to it either. The last part of the book is what most are irritated about. The book shows Batman and Catwoman giving into their desire after Catwoman is shown in an emotionally trying state. The book stops short of showing penetration, but it’s obvious the two are having sex. 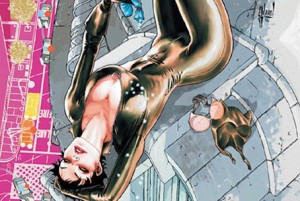 I don’t know about you, but this is not the kind of comic book I want to read. Decisions like these have drawn great outrage from the community and really cheapens some great characters DC has developed over the years. DC seems to be trying a little hard to sell more issues with the gratuitous T&A in their books. DC really doesn’t need to go that sexual when a simple google search will yield countless amounts of that kind of fan art. Just give us good, compelling characters and the rest will follow. Like I’ve said, there are still young audiences that enjoy comics. DC may be wise to watch the kind of content they are putting out.

#Multitasking while working on my #Streaming and #

Trying to pull of the @thatkevinsmith #SilentBob l

#MondayMemory had a great time at my first #Dragon

Got a #CellPhone mount for a #Tripod gonna use thi