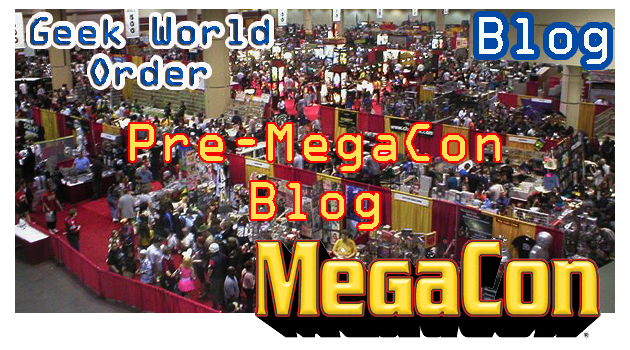 Hard to believe it’s already Thursday. The convention officially starts tomorrow, but today it’s time to make the trip out to Orlando. I haven’t been to Orlando for a few months so I’m gonna drive out early and just hang out for a while. Just a slow day enjoying myself. I’m already packed and just waiting for a good time to leave the house. I can tell it’s close as I’ve had progressively less sleep each night this week being so excited for the convention and seeing a bunch of great geeky friends.

I’ll be spending a good amount of time with the Slacker and The Man crew. They’re having a pre-convention party in their hotel room and will be playing something called “Battleshots”. Then on Friday night, they’ll be at O’Shucks on International Drive around 9pm for some drunken karaoke.

MegaCon is the start of convention season here in Florida. I’m very much ready to kick back and hang out with some great friends and just live it up. My trigger finger is also ready to go. I definitely plan on getting a lot of pictures to post on the site. If time permits I’ll write some about what happens throughout the weekend. Hopefully I’ll be able to do some live tweeting and facebooking during the con. Not sure how my phone will handle the event and this will be the first convention that I will had my android tablet. It’s a wi-fi only model so I hope the convention center has some free wi-fi hot spots to tap into. (a subsequent check of the Orange County Convention Center website tells me there is but let’s see how well it actually works.)

All that’s left to do now is just a few last minute things like setting up a few things to record on the DVR and getting everything in the truck. See y’all at MegaCon and I’ll be back later with some convention updates.

Finally made a new IG just for my cosplay stuff. You can follow me at JazzWreckCosplay

The #AllStarRace this year was a complete #joke @NASCAR and @TXMotorSpeedway should be ashamed.

Competition Caution? What the hell? Seriously Texas is a terrible track. #AllStarRace