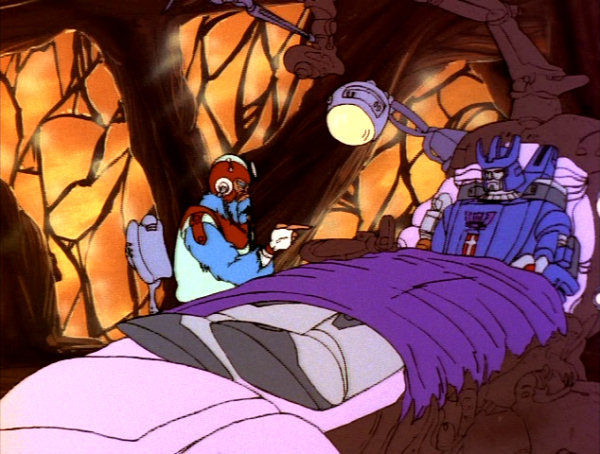 Note: This will be the first in a series of blogs highlighting underrated episodes of TV, characters, movies or other media that deserve a spotlight. Some may be me simply trying to explain why I like something more than I should.

The third season of The Transformers provided for a radical departure in the series in terms of tone, characters, and story. Many fans have a mixed opinion of the season. When the writing in the season is good, there are some absolute gems. One of those is the episode Webworld. It is a well written episode that really explores the true power of Galvatron. The episode is very different in that it is the most Decepticon centric episode in the entire series. Only a handful of Autobots are seen in the first few minutes.

The episode opens up with the Autobots mining an asteroid for a mineral they needing for their resources. The Decepticons arrive with the same goal in mind. The ensuing battle is quickly won without the Autobots doing much work. Galvatron’s obsession with Ultra Magnus, which began shortly after Megatron was converted to Galvatron, causes him to wreck his own troops to try to get to the one time leader of the Autobots before Rodimus had assumed control of the Matrix of Leadership.

At Decepticon Headquarters, tensions are mounting as the Decepticons are growing weary of Galvatron’s madness and several of them threaten Cyclonus with mutiny if the situation is not handled. Cyclonus receives a transmission from a Quintesson about the planet Torkulon, which may hold a key to curing Galvatron’s madness. This is could also be a ploy to eliminate Galvatron to help them retake Cybertron from the Transformers. Cyclonus tells Galvatron the Autobots are there and it takes no effort to get Galvatron to Torkulon.

Upon arrival, Galvatron demands Ultra Magnus and is quickly captured by the doctors of Torkulon. A small scene happens where Cyclonus has to fill out a bunch of paperwork and goes over fees with one of the bureaucrats of the planet. Even today, it stands out as a mini commentary of the medical system and all the red tape of getting adequate healthcare. The Torkulons put Galvatron through a series of tests that only enrage the Decepticon leader. Many of Galvatron’s tests are based on real world psychological treatment including word association and dramatherapy One test is an item building exercise that Galvatron ends up making a gun from the pieces he is given and shooting at the other patients. They do manage to diagnose his instability as being a result of a trauma involving plasma.  A direct reference to how Cyclonus found Galvatron in “Five Faces of Darkness.” After several tests, it is determined that Galvatron can not be fixed and is offered up to the Alya, the central intelligence of the planet for what would basically be a lobotomy.

After invading Galvatron’s brain, the planet begins to quake. Galvatron ends up infecting the planet with his own madness. It shows how truly deranged Galvatron is if his mental instability can destroy an entire planet. The damage caused will take the Torkulons centuries to recover from.

In a world where many of the cartoons of the time were little more than 30 minute toy commercials, good writing and character development can still shone through. Webworld is a striking example of that and is well worth a watch.

Today is a I need to get out of the house kind of day but not sure that's gonna happen.

What do I do when I have way too much time to think. Get to work apparently. Working on a few things to help expand my brand and let my branch out into other things. Making something positive happen after missing MegaCon.

Missed crossover opportunity. Batman using a Bat'leth as a weapon.