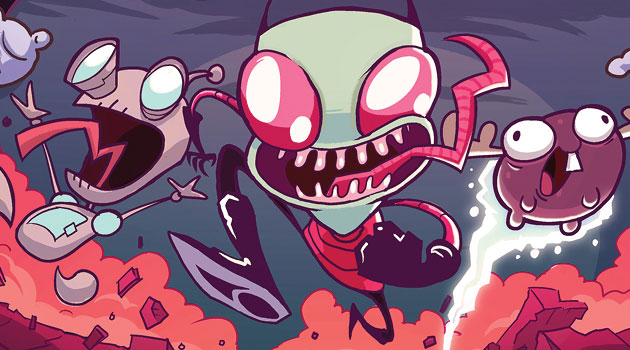 Invader Zim is one of my favorite cartoons. It’s dark, hilarious, off beat and all around fun. It’s been off the air for a long time, but it still has a massive cult following and its loyal fans have been looking for a comeback since the show ended. Oni Press has teamed up with Zim’s creator Jhonen Vasquez to do just that. Invader Zim is back as a monthly comic series.

The first issue was just released this past week. I have been looking forward to this comic since I first heard of this announcement. I am pleased to say it is everything I expected of it.

Let’s start with the art. The art looks like the cartoon on a page. It’s well done and just brings back so many memories with its style and great visuals.

The writing is top notch. Jhonen Vasquez is writing the comic and he has not missed a bit. The humor is hilarious. The dark part are as creepy as usual. The story is fantastic. It even directly acknowledges that a significant amount of time has passed since the cartoon and takes up a good chunk of the main story of the issue.  The issue serves as a reset to the Zim and Dib rivalry. The issue ends as the two are set to do battle with one another and all signs point to is being an over the top thrill ride that we have come to expect from these two.

I can not recommend this comic enough. I am very excited about what this comic has in store and will gladly buy it every month. You should do so as well.

One thought on “Invader Zim #1”