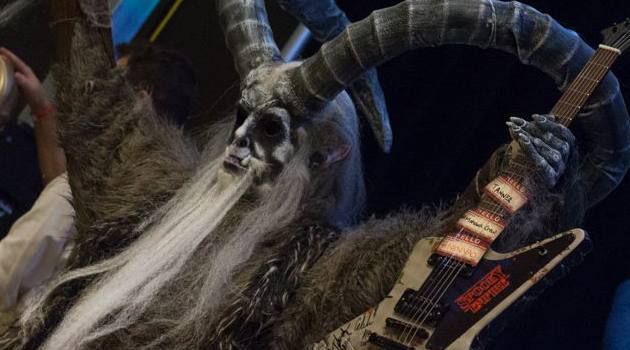 A big bold approach almost got destroyed a by a big bold storm. Such was the story of Spooky Empire 2016. Orlando’s horror convention found a new afterlife after almost having its highlander head cut off. Originally scheduled for October, Spooky was set to go with a number of vendors and a star or two already at the Orange County Convention Center when the big bad voodoo known as Hurricane Matthew rolled through causing an insane amount of chaos, eventually forcing the event to be cancelled. Or so we thought. After a bit of uncertainty and waiting, it was announced that Spooky and OCCC had come to an agreement of a December make up date. We would end up having a good old Nightmare Before Christmas.

I have to applaud the Spooky team from Petey and Gina to all who had a hand in making this happen. Spooky is a family and it keeps getting a higher spot on my favorite conventions list every year.I know they have all taken a good amount of flack but they pulled it off. With going to the convention center, obtaining and getting guests to come back such as the Stranger Things cast and Weird Al was a massive undertaking. Thank you for making it happen.

The con itself took on a very different look this year. After many years in hotels such as the Doubletree and the Wyndham, Spooky found itself in one of the halls of the Orange County Convention Center. This allowed for some breathing room especially on the always crowded Saturday. It allowed room for artists to roam, more vendors and of course room for big, bold guests. I have loved the idea of Spooky becoming bigger and better and I truly hope this growth continues.

Spooky as I have said is a family. I enjoyed my time getting to know some of my con family so much better and meeting new faces along the way. We were ready and rallied together to have a great event (two if you count the unofficial gathering at Gods & Monsters once Matthew rolled out). Even in the larger venue, much of the intimate, family feel was still there at Spooky this year. That is what makes conventions memorable. I mean, where else are you gonna find a crazy lady with a mohawk riding a hippity hop at 2 am in the hotel patio?

So many great sights and sounds. My weekend was highlighted by a crazy sock exchange, meeting great new friends, getting to know some better I only knew in passing, upping my photography game and of course meeting Weird Al. These are the weekends I live for and crave. Spooky delivered something I needed at a time I really needed it.

Keep on rocking Spooky Empire! See ya next year.