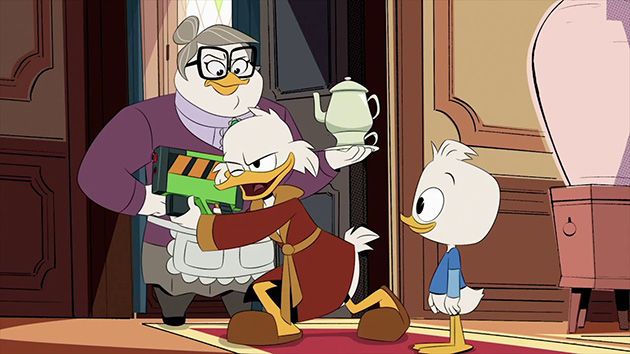 DisneyXD’s new DuckTales series has finally debuted with its regular weekly episodes. Does the series live up to the hype from last month’s double length premier. Let’s take a look at the episode “Daytrip of Doom.”

The episode opens to Scrooge waking up and admiring the money bin. Mrs Beakley comes in looking quite the mess. Scrooge is wondering why only to quickly see that the children are involved in a very serious dart war. Well, it’s serious to Webby. Webby’s protected childhood has given her a lot of time to be a skilled marksman and she quickly takes down the three boys who are just looking to have a normal game of dart war. Inconvenienced by this and by finding Donald using his washroom, Scrooge calls a family meeting.

Scrooge tells the family to respect his space and defers to Beakley for further house rules. This sets up the episodes secondary story as Donald is just trying to get some basic tasks done and believes Beakley’s rules are too strict. Beakley more or less believes Donald is physically incapable of taking care of himself.

While this is going on, the boys decide to go to Funso’s Funzone to have a normal afternoon. They end up inviting Webby along. They take the bus, which Webby has never done. Huey gives her a quick crash course in bus etiquette, which she promptly does the opposite of everything Huey says resulting in them being kicked off the bus. Their walk through the sketchy part of town gets them seen by The Beagle Boys, who decide that they would make a better heist than the bank truck they were robbing at that time.

Webby’s naive nature is brought into focus as she inadvertently gives away Louie’s scam for free drinks and erases Dewey’s top ten high scores on his favorite game. Webby is just trying very hard to be normal and it backfires on her. After thinking the ball pit was trapped, she fires her grappling hook and ends up getting them all banned. In the chaos, Beagle Boys capture the kids and call in Ma Beagle. Ma arrives to find the boys have already sent a ransom note and is furious as she believes all that Big Time’s plan did was paint  very large target on them.

Donald is the one that gets the ransom note and ends up having to go to Beakley for help. They arrive and Donald goes into a rage at the thought of his boys being in danger. He takes down two of the Beagle Boys which impresses Beakley and shows her that he can take care of himself.

This was a fun episode that allowed for a lot of character growth for Webby and allowed the kids to shine some as Scrooge only had a few minutes of screen time early in the episode. A bit of insight is given on Beakley in the episode or is it? At the end Donald asks her how she knows so much and she laughs and says she is a spy. It’s done in a way that makes you stop for a second and wonder if that is a true statement of if she was joking with Donald. Hopefully, we’ll get more answers soon, but I would not put it past her. More mysteries to solve as the series goes on.

One thought on “DuckTales – “Daytrip of Doom””