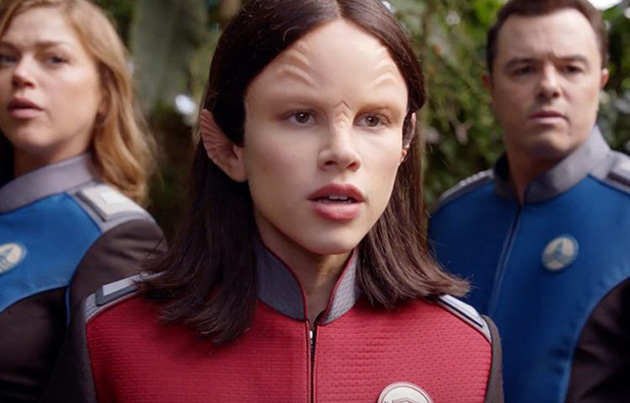 After a great start, does The Orville continue to impress with its second episode? The answer is yes, it does.

The episode opens with Bortus coming to Capain Mercer to request a personal leave to brood over an egg that he and his mate Klyden had just laid. There were a few cringy jokes but it was done in a way that the jokes were meant to be bad and give more credence to the Moclans being a very serious race. Bortus needs 21 days to hatch the egg. This leaves Bortus in his quarters for the rest of the episode and will help drive some of the plot.

After a routine mission, the crew comes upon what appears to be a Union vessel in distress. Aboard the ship are Mercer’s parents. Mercer and Grayson leave the ship to lead aid for the other vessel and with Bortus attending his egg, this leaves Lt Alara Kitan as the ranking offer so Mercer gives her command. After going to the alien vessel, a hologram drops and Mercer and Grayson are nowhere to be found.

The best part of the episode is the character growth for Alara. She is shown as scared and uncertain when she first takes command and making a rapid fire succession of errors within the first few minutes of her command. Dr Finn helps mentor her and gets her to realize the situation she is in. Alara leans to have more confidence in herself and be able to draw from the expertise of the crew surrounding her. She is faced with difficult decisions and direct orders from Union Command that contradict what she is trying to do to rescue Mercer and Grayson.

While captured, Ed and Kelly reminisce about their marriage and the issues that led to their divorce (aside from Kelly’s affair) as the zoo they are placed in is a replica of the apartment they lived in in New York when they were married. They relive some positive moments and eventually remember the small habits each other had that drove them mad. Seth MacFarlane and Adrianne Palicki deliver a performance that made you believe the two characters were married and really cements a great on screen chemistry they have that will help the series progress as it goes on.

This was a solid episode that really shows that The Orville is Star Trek for the everyday person and not Family Guy in space.