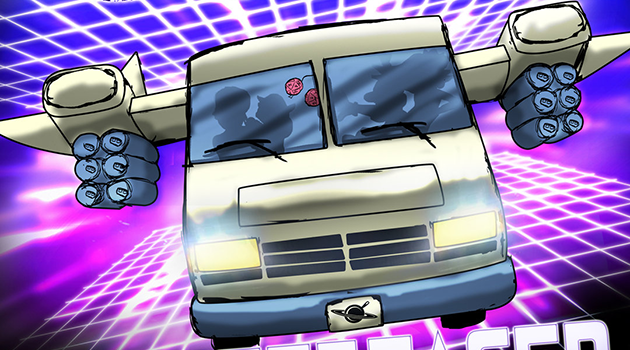 The Godfathers of Geek Rock are back with an all new album. Sci-Fried brings us Hyperspaced, their sixth studio album. The album is the result of several lineup changes that make band more one with the force. Sunni returns to the band as bass player after an absence replacing Dobbs and KSV has left the band. Captain Dan, the former pirate rapper is now in the band providing vocals and keyboard.

The bands sound is stronger than ever and it shines through. Hyperspaced is an album that you can listen to working out, just grooving out ot while making sweet holodeck love. This will be the soundtrack you play while you save the maiden in distress on platformers while you wax nostalgic on whatever happened to split screen while drowning out cursing twelve year olds.

The subject matter is as varied as ever. They remind us that it’s possible to be a fan of Star Wars and Star Trek and love both Luke and Scotty. Being a geek is a tremendous thing and the band flies their geek flag high. All said and done you just have to tell yourself I’m going to live my life my way and scream your geekiness from the mountain top. Geeks rule the world and it’s a great time to be a geek.

Life throws us little curveballs like when we insult everything we love when we say the wrong thing thanks to autocorrect, but we can put on some fun music, dance and scream Boom Boom C’Thun just to confuse the neighbors.

This album may not solve your problems but it does provide an escape with it’s great beats and powerful rock sounds. The sound of the album is great and definitely worth a listen. If you can, listen to it while you drown out the boss.

Winter has come and the temperatures are dropping, but Hyperspaced is a great rock album that brings the fire. It is an excellent addition to the Sci-Fried repertoire and really shows how the band has evolved and taken their music to a new level. This is the best album they’ve put out so far.