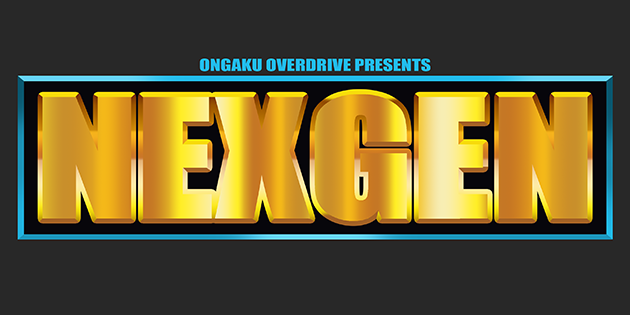 ORLANDO, FL — Ongaku Overdrive, who has brought fans Mega Mania: Celebrating 30 Years of the Blue Bomber and Orlando Overdrive, presents a brand new music event. NEXGEN showcases the next generation of our community’s brightest stars, who are ready to become the next Mega Ran, the next MC Frontalot, or the next MC Lars, to define a generation of what fans have come to know as “nerdcore” or “nerd music.” The lineup for NEXGEN includes None Like Joshua, Wreck the System, and LEX The Lexicon Artist.

“The future of nerd music is important to us and we hoping to make NEXGEN an annual event that can showcase artists in our community that are ready to go to the next level,” Kent Ward, founder of Ongaku Overdrive explains. “To really make a big first-year impact, we’ve already signed three incredibly talented acts, with more to come.”

NEXGEN will take place on Saturday, July 14th at The Geek Easy, located at 114 S. Semoran Blvd. Winter Park, FL 32792, located right across the street from Full Sail University. In addition to live musical performances, there will also be video game setups, prize raffles, and drink specials. Tickets are now on sale at https://nexgen.brownpapertickets.com.

None Like Joshua has dominated on the YouTube music scene for several years, with over 250K subscribers. His fast-paced and high energy raps cover video games and anime, but it was his “Evil Morty” rap video inspired by the Rick and Morty series that has brought him the most success, with over 6 MILLION views on YouTube.

Earlier this year, NLJ toured with legendary Mega Ran throughout the country, with many sold out shows and he has performed at conventions such as Anime Weekend Atlanta, NashiCon, and SXSW. None Like Joshua will be performing in Orlando for the first time at NEXGEN. You can find out more about None Like Joshua at http://nonelikejoshua.com.

ABOUT WRECK THE SYSTEM

Wreck the System is hip hop group from Baltimore with incredibly energetic stage shows that draw influence from old-school hip hop, without being afraid to integrate chiptune, rock, EDM, and dubstep into their music. Their latest album “Wreckfest” tells the story of up and downs of an anime convention-style weekend that is filled with truth, humor, and lots of fun. Wreck the System has performed at events such as MAGFest, Bit Gen Gamer Fest, and Orlando Nerd Fest: Fantoku. You can find out more about Wreck the System at http://wreckthesystem.net.

ABOUT LEX THE LEXICON ARTIST

LEX is was born in Taipei, Taiwan and emigrated to America in 2002. She currently resides in Oakland, CA. While a newcomer to nerdcore hip hop, she got the entire scene’s attention in 2017 with her first EP, LEX is More, with songs that tell stories that address Asian-American stereotypes, sexual identity, and the general day-to-day struggles of being a nerdy Asian woman.

The buzz LEX has generated would land her a spot on this year’s SXSW Nerdcore Showcase and she has played numerous shows on the west coast with nerdcore’s best of the best. LEX is hustling hard to not only make a name for herself, but to establish an identity for Asians in the world of hip hop. Her first full-length album, Raging Ego, released on June 6th to rave reviews. You can find out more about LEX the Lexicon Artist at https://thelexiconartist.com.

Ongaku Overdrive, based out of Orlando, Florida, was founded by Kent Ward in 2013 to bring video game bands, nerdcore hip hop, chiptune, and geek rock, otherwise known as “nerd music,” to an audience that was being underserved. Since then, Ongaku Overdrive has grown to be the #1 promotion for nerd music in central Florida by presenting high-quality events with strong musical lineups and a very welcoming atmosphere. Recently, You can find out more about Ongaku Overdrive at https://www.ongakuoverdrive.com.