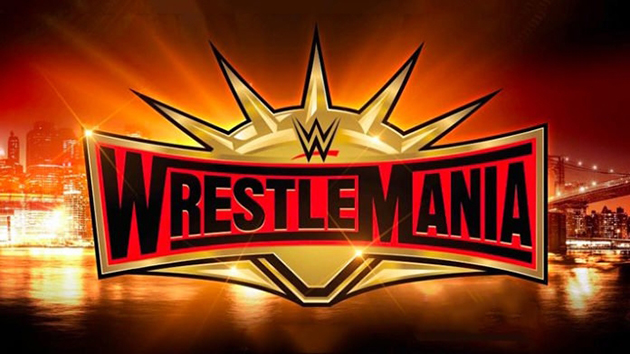 Wrestlemania has come and gone for the year. The annual sports entertainment spectacle always aims to give fans many moments to remember as big matches happen and championships are on the line. Including the pre-show, the event spanned almost eight hours of time on the WWE Network. Overall, this was a good Wrestlemania and better than the last several years of the show. Here are 5 of the moments that stood out most to me. 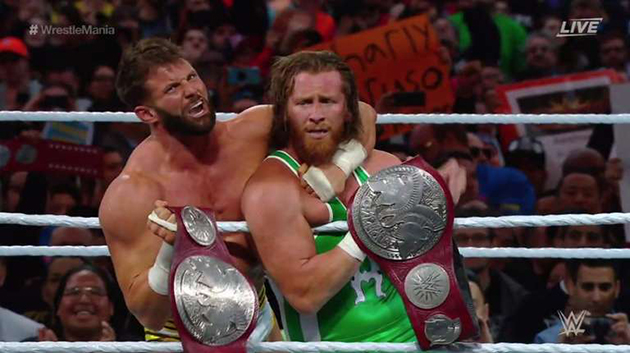 Ever since Curt Hawkins made his return to the roster a couple years ago, he hasn’t had the most success on the roster. In fact, he has had no success in his current WWE run. Including live TV, Main Event, house shows and live events, he had competed in a total of 269 matches since his return and had suffered defeat in all of them. With a refocus on the RAW tag team division, his close friend Zack Ryder decided to come to his aide to help restore Curt confidence and help him find what he needed to end his losing streak. After challenging The Revival after the go home RAW, the match was set for the New York natives to possibly earn championship gold in their back yard. At the end of the day, it was Curt Hawkins who scored the upset set win for his team and got his long awaited Wrestlemania moment by ending the losing streak and getting a championship in the process. It was Hawkins first championship sincee last holding the tag team championship with Ryder in 2008. 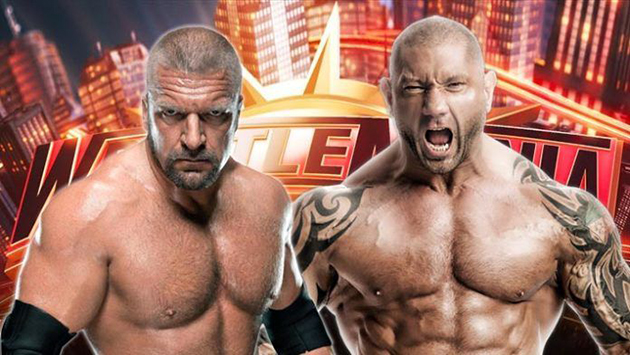 Former Evolution stablemates, Triple H and Batista waged war in a No Holds Barred match. The stipulation was added to an already heavy feud that centered around Batista believing Triple H not giving what he was originally promised back in 2014. Most noticeably, his one on one championship match from winning the Royal Rumble that year. This match would eventually become the triple threat that Daniel Bryan would be added to and eventually win. Shortly afterward, Batista would leave following his infamous “I Quit” promo. Batista would go on to movie mega stardom with roles that included Drax The Destroyer in Guardians of The Galaxy. He still had unfinished business with Triple H. The match at Wrestlemania was what you would expect between the two. It was heavy hitting and while brutal didn’t really live up to no holds barred outside of a few moments. One in particular will stand out. Triple H had Batista on the ground and was assaulting him with a chain, a vice wrench and finally a pair of pliers. He had Batista pinned under a chair to prevent escape. He took the pliers and forcibly removed the nose ring that Batista was wearing. Batista’s acting skills have grown as he was able to portray shock as the pliers came to him. It was a painful moment to watch, but indeed one that will be remembered for some time. 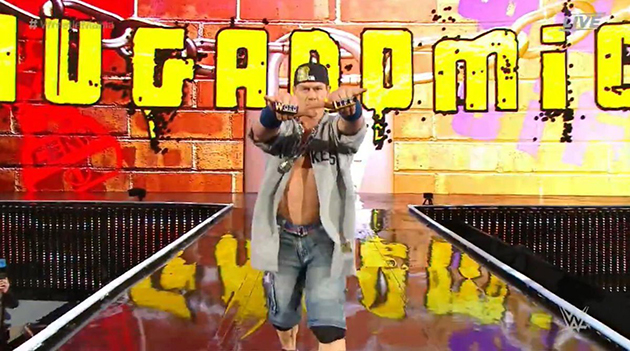 #3 John Cena Interrupts Elias As The Doctor Of Thuganomics

Wrestlemania featured a musical act in the form of Elias, who was billed as the musical guest for the show. After an elaborate performance that included Elias performing with prerecorded videos of himself playing multiple instruments, Elias is interrupted by an odd video package. The video is an old news reel featuring Babe Ruth calling his shot and then hitting a home run. The video then changes to say Thuganomics as John Cena’s old theme begins to play. Out comes Cena dressed in full gear from the Thuganomics era including a throwback jersey, the heavy chain, and the word life knuckles. Cena proceeded to spit lines at Elias including telling Elias his performance sucks sucks just like John Cena movies. Cena then proceeded to lay out Elias with the FU and the Five Knuckle Shuffle to end the segment. This segment was very enjoyable and will be much better remembered than Cena’s “match” with The Undertaker last year. 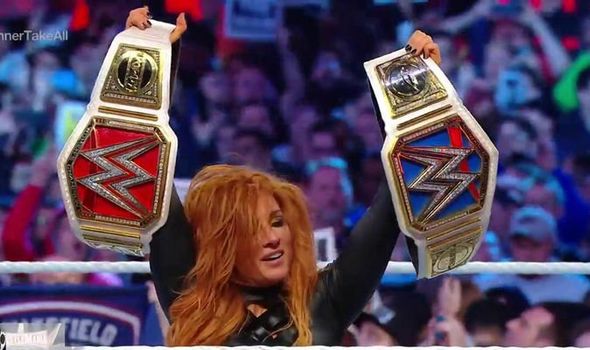 The main event of Wrestlemania featured a women’s match for the first time in history. This had been rumored since Ronda Rousey made her in ring debut at last year’s Wrestlemania. At the time, many believed the match would be Rousey vs Charlotte. Then as the year went on, Beck Lynch continued to rack up wins and garner support from WWE fans. This would lead to Women’s Championship match between Rousey and Lynch at Survivor Series. The match would end up going to Charlotte after Lynch’s face was broken by a punch by Nia Jax. Lynch continued to build momentum, eventually winning the Royal Rumble and challenging Rousey. Through multiple story line twists, Charlotte was added to the match and Becky had been removed and had to earn her way back in. Charlotte won the Smackdown Women’s championship prior to Wrestlemania and then a winner take all stipulation was added to match. After a hard fought victory, “The Man” stood atop the Women’s division as the champion of both brands and handing Ronda Rousey her first pinfall defeat. 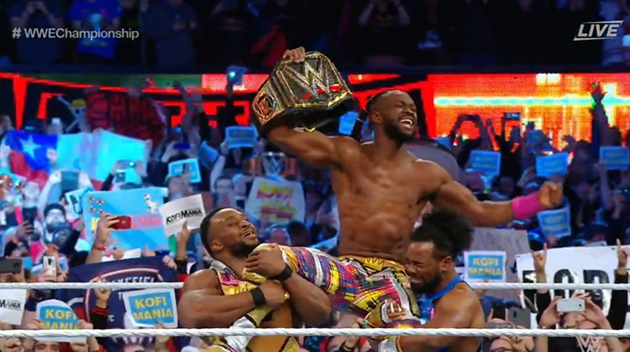 This was a moment that likely wouldn’t have happened without some extenuating circumstances, but WWE listened to its audience and gave us one of the best Wrestlemania moments in years. Going into Elimination Chamber in February, Kofi Kingston wasn’t even one of the participants in the match. One of the scheduled participants was Mustafa Ali. Ali suffered an injury and a new contender was needed. After a grueling gauntlet match, Kofi had earned the chance to be in the Chamber. Kofi was going to compete in an Elimination Chamber before, but was assaulted and replaced in the match by Edge. After earning support from the WWE Universe, Kofi made it to the final two of the chamber to ultimately be defeated by Daniel Bryan. Kofi would be given a one on one match at Fastlane but would be replaced in the match by Kevin Owens after a decree from Mr. McMahon. After Fastlane, Kofi demanded his shot. Mr. McMahon would concede, only if Kofi won a gauntlet match. He faced and defeated Cesaro, Sheamus, Randy Orton, Samoa Joe, and Rowan. After the win, McMahon changed the rules to say he would also have to defeat Daniel Bryan, who proceeded to beat him after Kofi had been in the gauntlet for nearly an hour. Still, support raged on from the WWE Universe and The New Day demanded one more chance. McMahon made another gauntlet. This time, Kofi was banned from ringside. He and Daniel Bryan had referred to Kofi as a B+ player, the same line McMahon and Triple H had given to Daniel Bryan going into Wrestelamania 30. This time, Big E and Xavier Woods had to prove they were more than B+ Players to get Kofi his shot. They began the match by Defeating Gallows and Anderson, Nakamura and Rusev, then The Bar. The Bar then put Big E through a table after that part of the match. The gauntlet took a turn of hope as the Usos came out next. They cited the wars they had fought with The New Day and in a sign of respect, forfeited their part of the match. The New Day then defeated Bryan and Rowan after pinning Rowan under an announce table so he could not get back in the ring before the 10 count. The match between Bryan and Kofi was a hard fought match and Kofi Kingston won in the end. Kofi’s win was accented by Big E and Woods presenting Kofi the correct world championship (and not the custom one Daniel Bryan was using). As Kofi was celebrating with his New Day brothers and his two sons, the announcers were noting his achievement capping the eleven years he had been on the roster so far. The pure jpy in the celebration made this one of the all time great Wrestlemania moments that will be remembered and used in highlight packages for years to come.

3 thoughts on “Top 5 Moments From Wrestlemania 35”