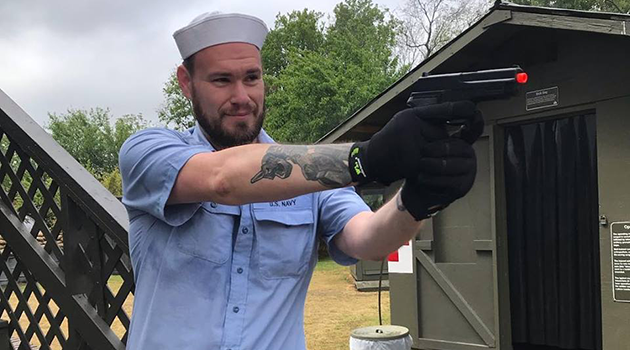 As I look back at my goals for things I want to accomplish for myself and for the site, one things keeps coming back over and over again: making out of state trips for events. It’s not like I haven’t tried. I’ve looked into other events in the past, but for a variety of reasons, a few logistical and mostly financial, I haven’t been able to take that first out of state road trip. I am very happy to say that has finally changed. Last weekend, I was able to make the trip to Mt. Pleasant, South Carolina to be a part of Operation: Yorktown.

Operation: Yorktown is a yearly gathering and photoshoot held by The Finest: A GI Joe costume club. This was a trip I had wanted to make last year, but could not due to finances. The club uses the gathering as chance for members of multiple regions to meet together and have fun while taking a crap ton of photos to use on social media to help promote the club through the next year. I can honestly say this was one of the most fun events I have ever been to, even though we had a few small setbacks.

Everything stated on Thursday. I loaded up my car and had a slew of podcasts ready to navigate I-95 and the six and a half hour drive ahead of me. Easily, the longest I have driven solo, the trip was fun and mostly uneventful. I only needed a few breaks and I had mainly planned those to be at the state lines to take cheesy tourist selfies. I’m not even ashamed. I usually don’t have a lot of pictures of myself from trips and I figured i should do it at least once. Along Route 17, I came across Cook Out, a burger place well known in the Carolinas, so I had to check it out. It was also about 6PM so I was getting pretty hungry and ready to be off the road. It was a good choice as the food was hot and good. I wish we had one of these in Florida. After successfully getting to my hotel and checking in, it was off to Local 616, where several of us met up and hung out for karaoke ahead of the next days events.

Friday morning rolled around and the excitement was at a weekend high. The moment had finally arrived. I got to Patriot’s Point with two costumes in tow. I ended up not wearing Scoop, but that one will come back on a future trip. Weather was a concern as it was raining on and off for the first part of the day. Many of had gone ahead and suited up for what we were going to wear on the carrier but a decent break in the rain allowed us to explore outside before moving on to the carrier. The set up at Patriot’s point is quite impressive. The main park area features a number of vehicles, a watch tower, bunkers, and other great elements that provided for a great range of photos. This proved especially as I bounced in and out of photos to be in them and take them. I have already been working on editing those photos and I really believe I got some great shots. We took a break for lunch then headed over to the Yorktown.

The Yorktown is a beautiful ship. It was a sight to behold and I was in awe the whole time. My dad was in the Navy until about my first birthday before health issues put him out of the service. I never got to experience a ship in person or take a dependent’s cruise as I was still too young. Yorktown was my first experience aboard a ship like that. Now I can understand why he loved it so much. One of the most impressive things was the view from the flight deck. That was perhaps one of the most breathtaking sights I have seen in my life. Staring straight out into the open water was just an awe inspiring sight. My dad loved being on the water and I completely understood why after seeing what I saw that afternoon.

My dad being in the Navy likely had a lot to do with my love of the character Shipwreck growing up. That’s why Shipwreck was one of the first costumes I ever did. In a way, it was going to be the closest I ever got to putting on a real uniform. I had a few physical factors that would keep me from serving in the military and I had also chosen to go to college as well. Being on that ship made me have the what if thoughts but overall, it was an amazing experience that left me wanting more.

After out time on the carrier, several in out group moved over to a nearby destroyer while a few of us ventured over to submarine that was on the property as well.  The sub was also an experience. You can not be claustrophobic and be on a sub. I am a tall man around 6 foot 4. The corridors and doorways were not meant for an individual of my size. Moving from section to section ended up being quite a workout. It was still great to experience the conditions these soldiers live in a daily basis. I can tell sub life is a challenge both physically and mentally. I have a greater appreciation for those that choose that life.

After a short rest and a chance to shower after being in costume all day, out group met up for dinner to get to know each other better and just enjoy out nerdy connection. Ever since I joined The Finest, I had been learning about all the different groups from other states and had wanted to get a chance to meet some of them. I am so thankful to be given that opportunity. The Finest has been an exemplary group in its charity and costuming efforts. At the heart of it, are a great group of men and women who share a bond over dressing like real life action figures. Being able to interact with other members I had only seen on Facebook groups before and now being able to bond with them and call them friends made the trip even more worth it.

I already can not wait for Yorktown next year. Being my first solo trip out of state, it was all more than I had expected and I already have the urge to expand my horizon when it comes to conventions and events. Hopefully, travel will become more of a norm for me. Taking a trip like this was a big goal for me. Now to make it happen more often.

One thought on “Operation Yorktown: A Road Trip To Remember”