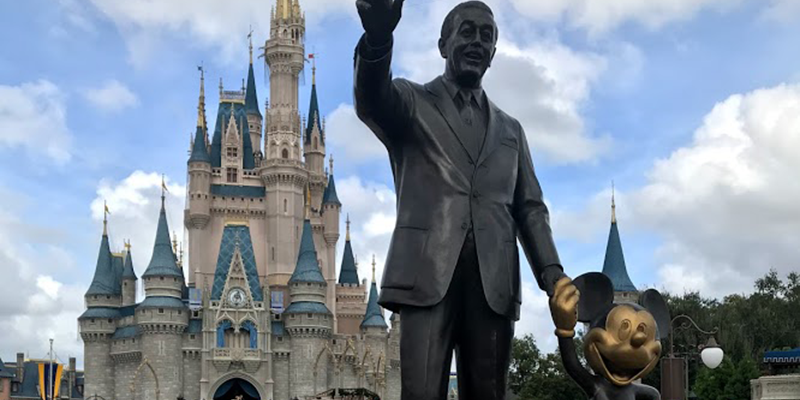 It’s known as the most magical place on earth. Walt Disney World is the vacation destination to be wowed and amazed. But as an adult, is there still magic in it’s original park, The Magic Kingdom. That is what I wanted to figure out, so I took a trip to the park as I continued to explore Disney with my new annual pass.

From the onset, Magic Kingdom is massive. On my previous trip to Epcot, parking to front gate is a relatively short walk. Not at the Magic Kingdom. From the parking area, you have to take the monorail or the ferryboat to the main park entrance. I chose the monorail and the view was nice.

When I got to the entrance, I was greeted by Main Street USA, the first area of the park you see. Head straight down and you will see Cinderella Castle, the iconic symbol at the center of Disney World. From that very moment seeing the castle, I certainly felt the awe and wonder of the park. In front of the castle is a statue of Walt Disney and Mickey Mouse called “Partners”. It is a beautiful statue that is wonderfully framed by the castle upon viewing. Just a few short minutes into the park and I’m already feeling the magic of Disney.

Now, it was time to go exploring. I wasn’t in much of a hurry but I knew exactly where I wanted to start: The Haunted Mansion. I opened up the My Disney Experience app (a must have for your Disney journey) and found my way to the ride. When I made it through the line (maybe 20 minutes) and got inside I certainly felt a wave of nostalgia. This ride was pretty much how I remembered it as a kid and that is a good thing. The visuals and the slight of hand in the pre ride chambers are still fantastic. Disney rides are an absolute experience. Most of them aren’t fast and take a good amount of time. They are meant to be an experience and to open up the imagination. Haunted Mansion really did that and so far is my favorite ride that I’ve experienced on this Disney passholder journey.

From here, I tackled two of the more notable rides at the park. The first being It’s A Small World. Yes, the song is stuck in my head days later. Yes, it was worth it. Another that was much how I remembered it, the ride is an icon and rightly so. It has stood the test of time and still shows the ideas of love and unity that Disney strives to provide for its guests. The imagery is fantastic and the scope of the ride and the detail and phenomenal.

I also headed to Adventureland to relive Pirates of the Caribbean. The boat ride still held the same place in my heart it did as a kid. It’s still the same ride just with the addition of Captain Jack Sparrow. Aside from the cannonball spot where I ended up getting water directly in my eye, I still enjoyed the ride and reliving it and making new memories experiencing it. So far I was three for three in the nostalgic feelings of the rides I remembered.

Next was a chance to try something new. I finally got to try the sweet pineapple treat known as Dole Whip. The cold confection was amazing and really hit the spot as it was staring to get to the warmest part of the day. Aside from going on Pirates, this was the other reason I headed to Adventureland at the time I did. But now it was time to keep wandering.

From there, I tried to cut across the park to get to Tomorrowland, but I hit a roadblock. I didn’t realize it was time for the parade. The crowd was forming and I didn’t really want to fight the crowd to turn back so I stayed for the parade. It was actually a fun show with Disney characters in costumes you don’t normally see some of them in. Next time though, I’ll try to be more careful about planning my day and making note of show times. I was in no hurry that day, so everything was fine Once the parade was over, I cut over to Tomorrowland.

In keeping with my accidental happenings, I wound up seeing a sit down show. It was Monsters Inc. Laugh Floor, which ended up being a funny show and a welcome reprieve to get inside for a little bit. The show is an interactive comedy show that takes audience feedback and projects it on screen. Great use of technology in creating a tailored experience for park guests. In Tommorowland, I also went on the People Mover, a slow ride all through that section of the park and a great chance to get to map some of that area out in my head. I also went on Tomorrowland Speedway, a ride I always wanted to do as a kid, but never seem to get a chance to. The car didn’t handle very well and being 6’4″ it was a bit awkward to get to the gas pedal, but the track and surrounding scenery were beautiful.

After that, I went into the gift shop and grabbed a new pin for my ever growing collection and decided to head home. The sun had set and the monorail ride back to parking had a wonderful night time view. After my first visit to Magic Kingdom since Grad Night 2004, can I say the magic is still there for an adult. The answer is a resounding yes. For the adult Disney fan, there is plenty to take in and experience. The rides are immersive and really provide an atmosphere to let your imagination tun wild. I know I certainly had fun and there is still so much more I want to explore. I certainly look forward to doing so in future visits. There is plenty to do in terms of shows, rides and dining I want to see and experience. Experiencing has been the hallmark of my Disney trips so far. I look forward to future trips and documenting my experiences here.