Greetings GWO Universe, it’s your fearless leader Randy here. Thought I’d start up something new here and do more of a personal blog along with all the news, reviews, and other things the site has to offer. I hope you don’t mind me getting a bit personal, but I really want to share my thoughts and opinions on things that may not always fit into the news category. Well, where to start though. Pretty good question and perhaps the best answer may be to start at the beginning and tell you a bit about how I became obsessed with geeky things. Well, to put it simply: robots.

I have always been fascinated with mecha and robots. Some of my earliest memories involve me sitting around and watching Transformers. This was the show that started it all. This was basically what introduced me to science fiction in general, not that I would realize that at a young age. But I was introduced to robots and alien planets and other sci-fi themes through that series. Suffice it to say, I became quite obsessed with the series. I owned a lot of Transformers figures growing up, many of which I still have this very day and a few are still displayed on my shelves and my desk.

One particular facet of the series I enjoyed was the transformation sound. Much to the chagrin of my mother, I quickly learned how to make the transformation sound and quickly irritated her with it while playing with my Transformers. I haven’t lost that ability either and can still make that sound to this very day at the age of 26.

The fandom itself was what led me to a lot of the internet culture. Specifically message boards. The first forum I ever signed up for and participated in was over at Seibertron.com which I still have an active account on over 8 years later. It was there I started going by the online handle of AutobotJazz, which I still go by to this day. That was one of the first realizations I made that being a fan of something you loved as a kid is perfectly okay once you’re an adult. I began to socialize with other fans my age and older. At that point, my nerdiness increased by a lot.

At various points in my life I’ve wanted to be involved in web design or some other internet related field. The first website I ever created was a Transformers fansite that I had entitled Transformers Headquarters. That only lasted a few months but the desire to do something on the internet was there. In a future blog, I’ll talk about the series of events that led to the creation of GWO and how it’s been a self revelation exercise.

In the world of firsts, the Transformers were once again involved at another point in my life. At the age of 20, I got my first tattoo. That being the Autobot insignia. Once you get a geeky tattoo, there’s no denying what you are. To this day, I still have no regrets on the tattoo. I now have three in total and will be getting more in the future. 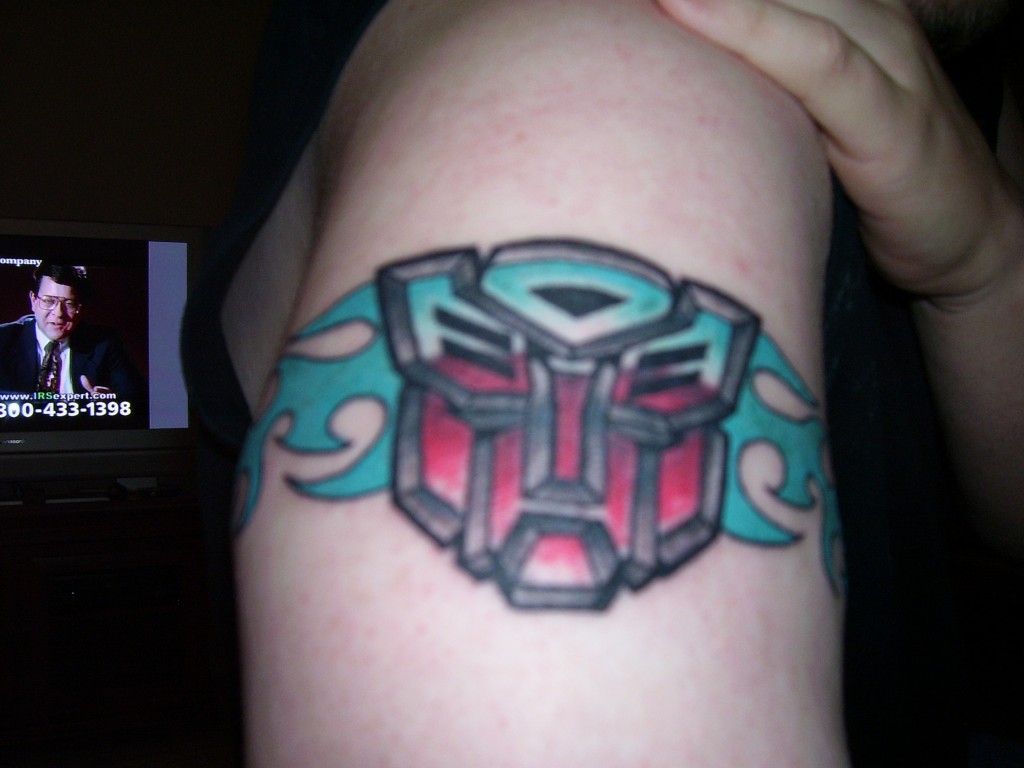 There of course are always low points in being a geek. I very vividly remember a point in time that exemplifies that. It was the summer of 2004. I had just graduated from high school a month before and was hanging out with my best friend at the time. It was a very odd day. We spent time in stores I was very fond of. He was trying to get me to buy a new wardrobe. He had become one of those people who was convinced being a geek and wearing geeky clothes would get you nowhere in life. Eventually we got into an argument about it and he even threw in a few jabs specifically related to my love of Transformers. He mentioned a few things about how women wouldn’t be interested in that kind of thing, etc. That’s okay with me. I wouldn’t want to be with picky, judgmental people anyway. I’m sure he’d be pissed today to see my tattoo and even geekier wardrobe. We haven’t spoken since that day.

To this day though, I am very happy in who I am. I have very much embraced my geekdom and it has inspired me to be who I really am and follow my geeky dreams. I have found great friends who love all the geeky things I do. I am not ashamed to let my geek flag fly. So much of what I am today sprang from a love of transforming robots from a far away world.

Like I said, thank you for letting me try something new and sharing my geeky life with all of you. I’ll try to post these regularly. I have no idea what I’ll write about next, but it’ll be geeky and from the heart.