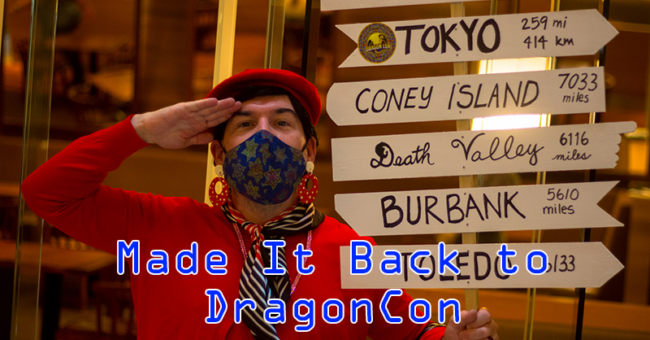 The words of The Proclaimers sum up the DragonCon experience, or at least for me. 500 miles was the drive from Central Florida to Downtown Atlanta for the pop culture party that is DragonCon. With podcasts galore and time to kill, I hit the road After driving 500 miles, I knew I was home.

It was an amazing weekend spent with nerdy friends and family. Hard to believe it’s been two years since the last one. DragonCon is the event to go to and when you’re there, you feel it. That feeling is what drives DragonCon. it’s being around people who are as passionate about their fandoms as you are yours. Some may ask how I know this so well as this was only my second DragonCon. It’s simple. It’s a feeling you know and recognize immediately.

The downtown Atlanta area sets the scene for a convention unlike any other. With events happening in five host hotels and a vendors area that takes over an entire shopping mall, DragonCon takes conventions to a whole new level with plenty to explore and do.

Along the way, I’ve learned more and experienced more. I have a better understanding of how the host hotels are connected. I found a way to get to the building where my car was parked without ever having to go outside (skybridges connecting the building are your friend). I learned more about the nightlife and the subcultures of DragonCon.

I added to my experiences and still have barely scratched the surface. I walked in the DragonCon parade, which was an amazing experience. I attended the Bunny Hutch for the first time as well. I even joined in on the ribbon collecting craze and finished the weekend with a very nice 69 ribbons attached to my badge. The DragonCon blood drive was a huge success even though I was not able to donate on any of the three attempts I made. These events and more all have their followings and make up wonderful subcultures that give DragonCon so much personality and really bring home the sense of family.

It was also nice to see my fellow G.I.Joe costumers again. we met for a hangout on Thursday, marched in the parade Saturday, and had a group photoshoot on the Hilton steps on Sunday.

You never know what to expect at DragonCon. Sometimes you’ll see hidden celebrities. One such example is WWE Superstar Xavier Woods. He has shown up many times to DragonCon as an attendee and usually does cosplay so you have to look. I spotted him at the Marriott (yes, the same one Loki was filmed at) and was able to get a picture with him.

After all of it, there still so much more to experience and I’m ready to do it all again. I’d make the drive back tomorrow to keep experiencing the magic of DragonCon. Even after only having been twice, it’s among my favorite conventions and I can’t wait for next year. I already have plans I want to accomplish next year. At DragonCon, I am among my people and truly at my happiest.