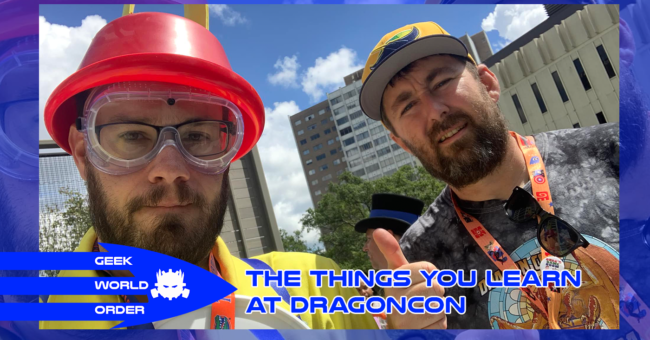 Every year at DragonCon, you learn something new and get a little better at navigating the landscape. It’s a huge convention and s lot of things happen, it’s hard to take it all in. After my third year at the convention, I still feel like I’ve only experienced a small portion of what DragonCon has to offer. I have indeed learned things this year that will make me better at DragonCon for years to come and today, I share those with you.

The first thing I learned is that air mattresses are evil and should be avoided at all cost. Three time I have gone to DragonCon and for the second time, my air mattress was dead on arrival. For next year, I’m going to bring a foam mattress that can be folded or rolled up. This is a case where simplicity is the way to go and technology just gets in the way. If your air mattress gives out on you, couch cushions can be arranged into a decent sleeping arrangement as a backup plan. Always be prepared.

Bring a hoodie. Labor day weekend in Atlanta can be a warm one. But, weather can change and the nights can actually rather pleasant. You also never know when an unexpected rain will hit. Sometimes the air conditioning can be a little wild and you may not have a blanket on hand. Having.a light jacket will help in unexpected temperature situations.

I also learned where the Westin is. Being one of the five host hotels to various programming tracks, I had never actually been inside the Westin. It’s a nice building with some nice atmosphere and some small stages. One of which I visited with a friend of mine to see Mikey Mason perform his comedic music. With all of the things to see and photograph, I still haven’t done a lot of panels and other entertainment at DragonCon.

I learned where the celebrity signing area at DragonCon is. Turns out the Walk of Fame is in the Marriott and is in a section of a lower level that I have passed many times before. Crazy to think I had never gone in there. I went late on Sunday so many celebrities were at panels, but there a few names remaining including Chad Coleman, Penny Johnson Jerald and Jess Bush. Awesome to see them all sticking around for the fans.

I also learned it’s sometimes not too hard to find celebrities outside of the tables and panels. It’s great to run into someone you see on TV or follow online. Last year, I saw Xavier Woods hanging out at the Marriott and this year it was YouTuber Adam The Woo while I was at the Disney photoshoot. These were some awesome moments and I hope I have more of those down the line.

Perhaps the best thing anyone can learn about DragonCon is that it’s better with friends. There is a lot to experience at DragonCon and it’s all amazing. I take a lot of pride in the work I do and the photos I take. It’s awesome when I see people using those photos as profile pictures and it’s what keeps me motivated. But DragonCon is truly experienced with friends. I took a little more effort to be at photoshoots and meetups I knew people I knew would be at. I’k try to do more of that in the future as well. I can do a lot of things at cons by myself and be pretty efficient at it but it’s nice to have the shared memories and the stories to tell. DragonCon is truly a massive family of geeky people celebrating everything they love. I also learned that I’m going to be a DragonCon regular. This will be in my plans for years to come and I already look forward to next year.