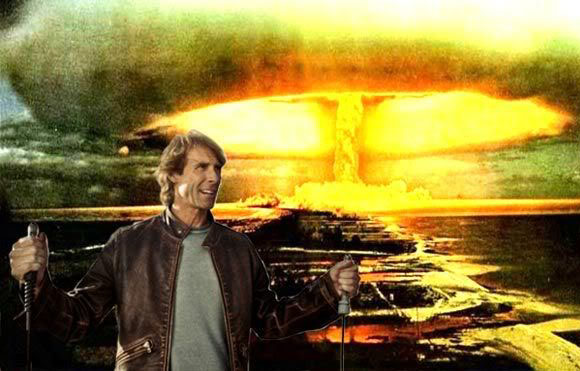 Film producer Michael Bay is at it again. He’s been given the reins to another well loved franchise from the eighties. This time it’s Teenage Mutant Ninja Turtles. Just remember that title. It’ll be important later.

With a recent announcement of how the direction of the film would be going, he has essentially broken the internet. A tremendous amount of fan outrage has poured out from the community at this. Bay announced that the turtles would be from an alien race. The filmmaker goes on to say: “When you see this movie, kids are going to believe one day these turtles actually do exist when we are done with this movie,” said Bay as he took the stage to discuss his new vision for the reptilian reboot. “These turtles are from an alien race, and they are going to be tough, edgy, funny and completely lovable.”

This ignited the fan base. While some details have changed through the years, the basic premise of TMNT has remained the same. Four turtles and a rat are exposed to radioactive ooze and mutate into sentient beings with the turtles going on to fight crime while the rat, Splinter, becomes their sensei and advisor.

Bay fired back with a quote saying: “Fans need to take a breath, and chill. They have not read the script. Our team is working closely with one of the original creators of ‘Ninja Turtles’ to help expand and give a more complex backstory. Relax, we are including everything that made you become fans in the first place. We are just building a richer world.”

While we understand Bay’s or any directors right to add their own creative twist to a film or a franchise, this time he plans to heavily alter the backstory of these beloved characters. It would be comparable to giving Batman an origin story where he gets bitten by a radioactive bat or Spider-Man’s powers are purely technological.

Many people still have not forgiven him for his treatment of the Transformers film series. While I think the films are okay, I will defend them in one way. Michael Bay did not mess up the basic story. We got a story about two warring factions of robots from the planet Cybertron that have the ability to change into alternate vehicular forms. Those factions being the Autobots led by Optimus Prime and the Decepticons led by Megatron. The rest of the film was his take on the events that branch from that, but we still got the basic plot we were all expecting. Bay’s plan is to completely alter that with a completely new story that ignores most of the original title of the franchise.

Fans are not the only ones outraged. An actual Ninja Turtle is outraged by it. Robbie Rist, who voiced Michelangelo in the nineties live action TMNT movies wrote out to Bay saying: “You probably don’t know me but I did some voice work on the first set of movies that you are starting to talk about sodomizing,” Rist wrote. “I know believing in mutated talking turtles is kinda silly to begin with but am I supposed to be led to believe there are ninjas from another planet? The rape of our childhood memories continues.”

What else Bay will do the franchise is still unknown. Will Bay hire a Victoria’s secret model and turn April O’Neil from a reporter into the manager of an all lesbian bikini car wash? Will Casey Jones be a crazed paranormal investigator trying to prove the existence of the “turtles”.

The fans have spoken and we hope Bay will listen to us. This film could be a huge success, or it could be another step in a large geek population choosing to boycott any future releases from Bay.