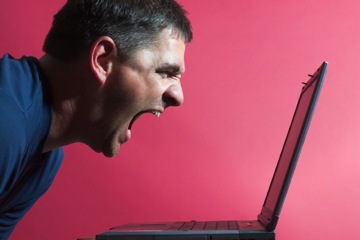 Everyone has something they don’t want to see happen. It’s no different in the geek realm. There are many things I fear may happen during my lifetime. Here’s a quick rundown of a few of my biggest geek fears.

The more and more George Lucas changes his films, the less and less I want to watch them. So far no other major director has made as many edits to their works like Lucas has. George, we love the movies you made. We appreciate the work you did at the time and love them because you had to get creative with how you made the movies and that showed in the final product. Going in and adding cheap CGI to enhance or redo a scene to match your original vision is blasphemy to others. My sanity will remain whole as long as other directors don’t follow your example.

2. Joss Whedon doing another show on a major network

Let’s face it, Whedon does not need Fox. They spit in his face every time he works for them, and his franchises die before they can achieve the long term vision Whedon lays out for them. Whedon needs cable. Something like AMC that will allow him to take risks and be rewarded for it.

3. The economy destroys local business such as Comic Book Shops

With our economy going downhill with each passing day, more and more businesses continue to plummet and shut down. Many of those closing are small independent businesses that cater to local clientele. One day I fear the operating costs will just become too much and beloved shops will close. With that, will be a loss of opportunities to build bonds and cultivate great geeky friendships.

The advent of the tablet and more and more digital content may mean the end of print literature. While I can understand the convenience of digital media, it can never replace the feeling of a good book and wanting to keep one on your shelf. From time to time I may use a digital copy as a trial and buy the best I find to put on my home library. I will, however, keep building my library and enjoy books the way they are meant to be enjoyed.

5. An idiot with a real weapon single-handedly destroys the convention scene.

This might just be the scariest one on this list. We know cosplayers who build very realistic props. There have been more and more reports popping up of bomb threats and violent threats made to convention attendees. There was that one pen stabbing incident at Comic-Con a few years ago. One day some psycho with an actual weapon may open fire and that would be the end of the convention scene as we know it. Weapon rules are very strict at cons right now but that doesn’t mean someone will get one through eventually. I love conventions and the friends I have made at them. This is my biggest fear as a nerd that something like this will happen and we’ll have to pay for one person’s screwup.