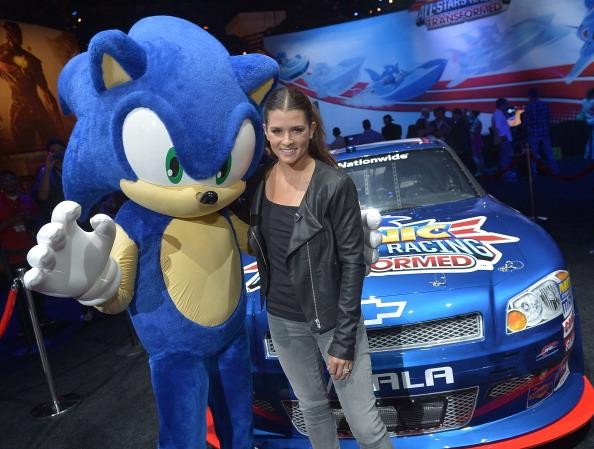 Danica Patrick is known for going fast. The former Indy Car driver who has come ever so close to winning the Indy 500 on multiple occasions, now competes in the NASCAR Nationwide Series every weekend in her #7 GoDaddy.com Chevrolet for JR Motorsports. Her team owner is NASCAR mega-star Dale Earnhardt, Jr. She is also known for sometimes provocative GoDaddy commericlas. Now you may be asking what does Danica have to do with the geek world?

Danica was on hand at the Sega booth this week at E3 Expo to unveil the #7 Sonic Racing All-Stars Chevrolet that she will race this November 3rd in the O-Reilly Auto Parts Challenge at Texas Motor Speedway. The car features the familair sonic blue and the games logo on the hood. Danica also took time to sign autographs and pose for pictures with Sonic.

There is also a bit of cross promotion going on as well. Danica will also be a playable character in the game. She will be able to slice and dice with the characters of the Sonic universe and other well known Sega franchises.

No release date has been given for the game yet, but it may likely be a fall release near November to conincide with the one race sponsorship on Danica’s racecar.