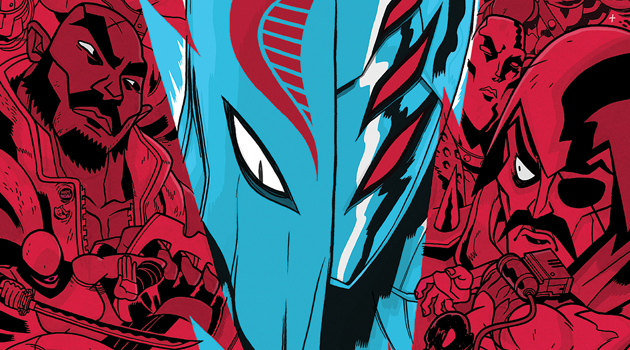 IDW Deviations is a series of one shot comics featuring a series of what if scenarios. Sometimes a small change can cause massive ripple effects through the timeline. GI Joe Deviations looks at what would happen if one of Cobra’s plans work and they defeated GI Joe to conquer the world.

The story opens with GI Joe running around the world investigating various weather changes as Cobra springs in and swiftly defeats GI Joe. Several years in the future there are only a handful of Joes left and Cobra has now instituted a strong world government.

The problem is that once you conquer the world, you have to rule it. Cobra is now more bureaucratic than ever and Cobra Commander is bored. Cobra Commander is now the definition of upper management. He brings up various plot to throw the world into chaos and his advisors have to remind him that his plans are not in the best interest of the world. Baroness and Destro have even settled down and started a family. The rest of the story follows the remaining Joes as they stage an assault on Cobra Island as Cobra Commander struggles to regain the fire he once had for world domination.

The art in this book is an interesting one. I probably would not like it for an ongoing series, but for a one shot with a bit of a post apocalyptic feel it is just fine. There are a few small nods in the book. Just look to Roadblock for a few of them.

Overall, this was a fun book with an interesting ending. I definitely recommend picking this one up.