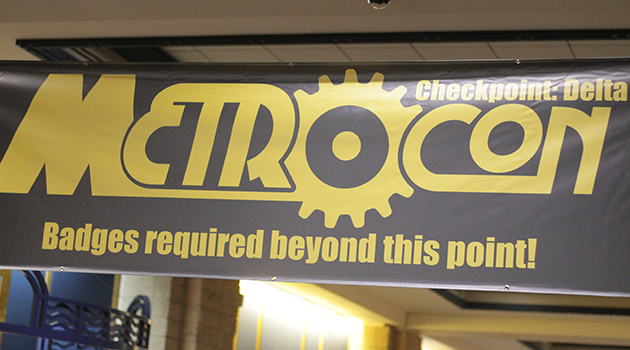 Summer continues to heat up but everything was cool by the bay this past weekend. MetroCon happened in Tampa, Florida. Taking place at the Tampa Convention Center, MetroCon is one of the largest anime conventions in the southeast.

This was my first time in Tampa at all. That led to some confusion on my end in actually getting to the convention center, which is in the heart of downtown Tampa. Nonetheless, once I got parked, it was a very short walk to the convention center. The facility impressed me very much. Three separate levels were sued with panels, game, and video rooms on the lower floor. The second was the registration area and some common areas. The third level was the dealer room and main events stage.

What impressed me most was the size of the convention. I had never been to an anime convention that size before. It was easily the biggest I have been too. There were plenty of dealers, many panels and all around plenty to do. The convention center provided plenty of space for the crowds. I never had any issues moving around even on Saturday, always the busiest day for a convention.

I spent the weekend as I do with most cons. Seeing the sites, strolling the dealers room and popping in and out of panels as I bounce between seeing all the great people I know at these events. The great view of the bay from the convention center even allowed me to catch a few new Pokemon I hadn’t caught yet in PokemonGo. The crowds were strong all weekend and the convention center was the perfect size building for it. This convention has been going on for a number of years and it is easy to see why. The staff was great and everything appeared to run very smoothly from what I saw. Hats off to the MetrCon crew for putting on a fun convention.

Sunday of MetroCon was Geek World Order’s 6th anniversary. I had always hoped I would be able to spend that day at a convention and the circumstances worked out this year for that to be able to happen, so that was definitely a highlight for me.

I would definitely recommend checking out MetroCon if you get a chance. I would very much like to go back in the future as long I can afford the travel.