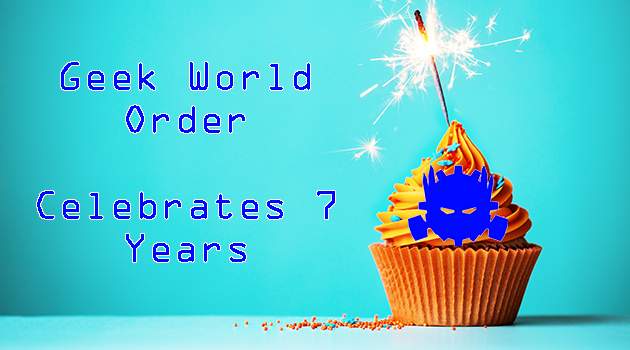 Hello geeks, Randy here and we’ve made it through another year together. Today marks the 7th anniversary of Geek World Order.

The further we go along, the more I think of how this has lasted. The site has now been around longer than most celebrity marriages, some large companies, and even some small countries. To imagine we’re older than companies such as DraftKings and SnapChat is quite astounding, but here we are. Even in my own life, most things have changed since I started this site. I’ve had a few different jobs, been unemployed for a year and a half, been at my current job for almost five years, taken on new skills, made new friends, experienced new things. I don’t even have the same computer I started the site with. A lot can happen in seven years. Although I look over and see a pair of Oakley sunglasses I bought before the site came to life and even those may change by this time next year.

The weird thing about these yearly posts is that in some ways, they get harder to write. It’s that want and desire to do bigger and better things. I do great things such as getting press passes, photographing legends such as Nobuo Uematsu from point blank distance, getting press only panel access at Star Wars Celebration, and all these other great experiences. I still ask myself, how can I top that? There are some bucket list items for me such as going to San Diego Comic Con, touring Japan, going to other out of state conventions such as DragonCon. With 10 years looming closer and becoming more of a reality, it may be time to start planning one of those bucket list items.

That’s for the future though, but what about right now you ask? Well, of course I’ll be sticking to the roots of Geek World Order and why it was started in the first place. That is to be a place where any geekiness can be displayed and loved. I truly believe in the geeky community and see no reason to tear down, but to love and build. Star Wars or Star Trek? There are people that love both for varying reasons and that’s okay. Anime is a great art form and another method of visual storytelling. Geeks Unite has always been the site mantra and it’s all welcome here.

There are still some small goals to work on. Like getting a celebrity interview at a convention. That one seems to have eluded me so far. Sometimes the celebrities have to cancel, sometimes scheduling doesn’t work, or sometimes the celebrities are already book by the time I get press credentials. That’s okay. It happens. No worries. But that is one I will get knocked off the list eventually.

Here’s to another year and more to come. I look forward to what the future brings for us.