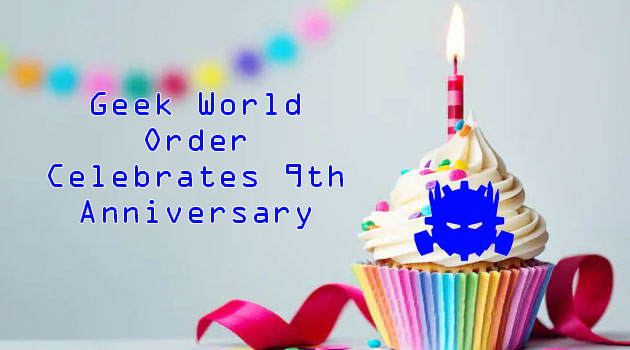 I know I say this every year, but once again here we are and it’s still crazy to think that we’ve made it another year. Today, Geek World Order turns 9 years old. It still feels like the first day and over the last year, it’s just been an incredible ride to get us to another anniversary.

The past year seems to be have been the year of accomplishing goals. From personal goals of getting into a new house and goals that affected the site and my coverage. it has been incredible. This year I crossed a few goals off my list. The first was accomplished back in April, when I took my first road trip for an out of state event. The Finest photo shoot event at USS Yorktown was an absolute blast. It was great to meet fellow members of The Finest from other club chapters and just see the beautiful ship and take a bunch of great photos.

One of the list items I seem to go through on a yearly basis is wanting to get celebrity interviews. It’s always been tough for some reason. There have been opportunities but things fell through for various reasons. But, now, it feels great to say that too can be checked off the list. MegaCon, which was my first convention way back in 2005, added another first to list of convention experiences in finally providing the pathway to get that first interview. The brief time I got to spend with Sherrilyn Kenyon was fun and I once again want to thank her for that time. I am just so thankful I don’t have to put get the first interview on my list of goals again.

Where do we go from here? I want to thank those that have contributed to Geek World Order in the form of podcasts, music videos, and other forms of media that I have been able to share and promote. Thank you all for allowing me to help promote you and for the promotion you have all given me. The future keeps looking brighter and brighter. As I had mentioned before, I moved into a new house. This happen right after MegaCon and has really helped my outlook. I have more of my studio equipment set up and in ways I wouldn’t do in a rental house. It was also a house that held a lot of negative memories and it was time to put that in the past. The new office is set up and ready for me to better produce my own content. The photography will come back stronger than ever. I had to slow down on events some this year to have funds for the move and to facilitate bigger trips such as Yorktown. I’m still in a bit of a conservation mode for one more big thing this year.

There have been a few things that get put on the someday list every year. Getting a celebrity interview, going out of state, going to San Diego Comic Con, going to DragonCon. As seems to be the theme of the year, some of these opportunities are just falling my way and I need to take advantage of them. I have been presented with an opportunity to make DragonCon happen this year. It involved a few deals and some work but this year I will make the trek to Atlanta for it. I am extremely excited as I have heard so much about DragonCon and now I will be able to experience it. I will definitely be covering that one.

But, I also have great things coming sooner than DragonCon. After some development and needing to wait on timing,  Totally Radical Cartoon Podcast will finally be launching. This show will be a look at all of the 80s cartoons and seeing what we can get out of them as adults. It will be a look at a different episode of a different series each week. My co-host, Phil and I have got a great show in line for you. I can not wait for everyone to hear it.

I honestly fell very blessed with what has come out of the last year in terms of personal growth, making new experiences, and getting new content out. I fell like I’m on a great path to make the march to the site’s 10th anniversary next year a memorable one and I feel it will only get better from here. Once again, thank you to all of the supporters of the site. Without all of you, there is no Geek World Order. Thank you my friends. Thank you for all the memories and for all that is to come.